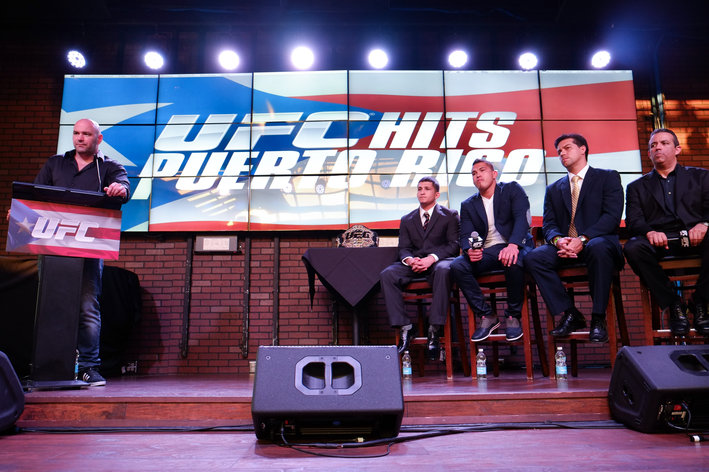 It is fair to say that when it comes to giving the fans what they want, the UFC are the best at it. Over recent years, fans from across the globe have been lucky enough to have the opportunity to attend a UFC event in their own country with the promotion spreading their wings to countries that include England, Ireland, Brazil, UAE, China and Germany –  and that is to name just a few.

This being said, one country that hasn’t played host to the UFC as of yet is Puerto Rico and UFC Senior Vice President of Regulatory Affairs, Marc Ratner, informed UFC.com that the promotion is hoping to stage an event there in 2015.

“I’m going to Puerto Rico to meet with the athletic commission and some government officials there because we do want to fight there sometime in 2015 (in San Juan). And this will be setting it up. Making sure they use the Unified Rules.“

Ratner, the former executive director of the Nevada State Athletic Commission (NSAC), says Puerto Rico is a natural fit for the promotion given its rich combat sports history.

“It’s a big boxing country, no question there. I think it’s a natural place for UFC. I think we have to get more fighters there. One of our champions, Anthony Pettis, is from Puerto Rico. So they know about combat sports. Obviously, we need to do more pay-per-view work there and more television work there. But I think if we bring a show there, we’ll do great.”

In just 4 months time (15 November 2014) the UFC will be putting on its first ever event in Mexico where Heavyweight title fight between current champion Cain Velasquez will be taking on Fabricio Werdum. The UFC has plans to do the same for Puerto Rico where Anthony Pettis will defend his current Lightweight champion belt in his home country.

UFC president Dana White visited the country earlier in the year with brothers Anthony and Sergio Pettis to promote the UFC and hold seminars for aspiring local fighters. Two years prior to this, “Suga” Rashad Evans attended the country and judging by the warm welcome that he received, the country is very welcoming to another combat sport other than boxing.

I personally think it is great that the UFC are entering more and more countries. Every year we are seeing them give more to the fans and what better way than to give the fans the option to attend one of these large scale events. The sport is, and has been for a while, the fastest growing sport in the world. This is the reason why.