GSP Vs. Hendricks 2 – Could This Be In The Pipeline? 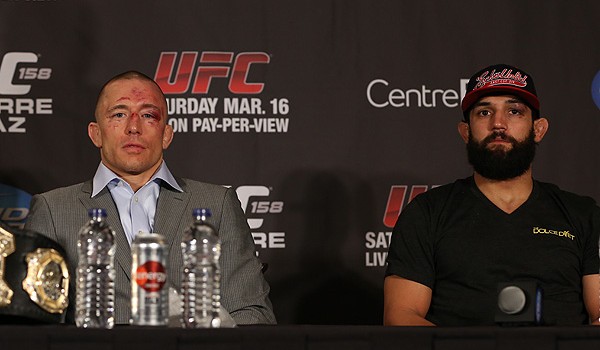 We all know that GSP‘s controversial win against Hendricks back at UFC 167 ended with his retirement leaving the UFC welterweight belt vacant, but recent actions and words can lead you to believe that GSP Vs. Hendricks 2 could be well on its way!

UFC welterweight champion, Jonny Hendricks, recently spoke to a source with his reasons as to why this fight may just happen.

GSP will always be within MMA headlines. After all, he had one of the longest running win streaks in UFC history and is one of the most recognizable faces of the UFC, if not, within MMA in general.

At UFC 167 (November 2013), Georges St-Pierre walked away from their previous bout and retained his welterweight champion title, which many MMA fans believed to be a mistake and scored the fight to Hendricks. GSP then stepped away from the sport which left the welterweight title vacant. Hendricks then went on to beat Lawler and retained the title for himself. This has left a void that Hendricks wants to fill due to not having beaten the champion to gain the full respect as a UFC champion.

As the new champ has said many times, he would like to rematch St-Pierre, but he won’t consider his career incomplete if the chance doesn’t arise.

The next steps for Hendricks‘ is to undergo intense rehabilitation after sustaining a bicep injury during his win against Robbie Lawler. Hendricks will then face the winner between Robbie Lawler vs. Matt Brown which is taking place this Saturday at UFC on Fox 12.

Until then, he has time to entertain a variety of thoughts about the welterweight division and, of course, St-Pierre.

Hearing the former champ speak about weight is a particularly amusing topic for Hendricks, who frequently tips the scales at more than 200 pounds prior to a fight. A fast-food addict, the champ still entertains the thought of moving to the middleweight division at some point.

When St-Pierre speaks about packing on pounds, Hendricks interprets it as the ex-champ talking himself up in advance of a comeback – and he believes it’s nothing to brag about.

“He didn’t feel that strong,” Hendricks added about their UFC 167 fight. “And so that’s just one of those things where I’d like to face him again. Now, I’ve got the belt, and he has to beat me. And realistically, I don’t think he’s going to.

“The more that I’m training for these five-round fights, I’m getting better, and I’m still young at this. Most of the guys I’m fighting are 10, 12, 14 years they’ve been fighting. I’m only seven. I’m still developing my striking, trying to tune it up. Everything is starting to fall into place.”

This weekend, Hendricks’ attention is all on the bout between Lawler vs. Brown. The favourite being Lawler, means the current champion could be facing Lawler for the second time.

When Hendricks was asked about this Saturday’s event, he said:

“Realistically, I don’t really care (who wins on Saturday),” Hendricks said. “There’s a part of me that would like to face Robbie again being healthy. But then again, there’s a part of me that wants somebody new. I’m torn on this fight. Also, I don’t like to pick the welterweight class because if I sit here and (say), ‘Robbie Lawler is going to smash Matt Brown,’ and all of a sudden Matt Brown beats him, did I give him fuel for to fight me? And vice-versa.”

“I’d like to see how it plays out because I think they both have a chance to win.”

The thought of a rematch between GSP and Hendricks is very exciting and would inevitably be one of the biggest fights that could possibly happen within the MMA scene right now.

Tell us your thoughts…

UFC In Scotland? Do They Have The Fanbase To Pull It Off?