by MMA UK
in Bellator
35

This Friday sees the first installment of Bellator under their new boss Scott Coker. Coker did amazing things with Strikeforce and found a missing niche that meant for a brief time Strikeforce had just as much hype as the UFC through his acquiring of some of the best heavyweights and pride veterans from round the world. Coker has said they will be scrapping the tournament formant and soon Bellator will be running regular fight cards under a more standard presentation. This enables their champions to fight more often rather than being out of action waiting for tournament winners.

Check out the full line up and records below. 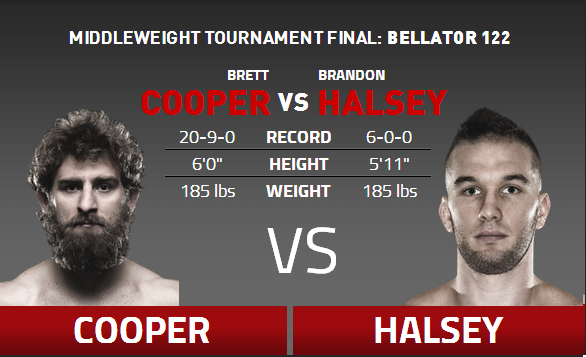 Brett ‘Fudoshin’ Cooper is 7-3 in his last 10 fights despite breaking his most recent two fight losing streak via a knockout win over Kendall Grove in his last fight. Cooper has been a respected tough veteran of Bellator MMA for some time now with 13 fights under the banner over the last 4 years. Cooper is a decent all rounder and two of those three losses under the Bellator banner came to champion Alexander Schlemenko.
Brandon ‘Bull’ Halsey is an undefeated 27 year old young prospect who started his career strong by defeating a well known veteran and former UFC fighter Shonie Carter via UD in just his second pro fight. Currently 4-0 in Bellator, Halsey has spent nearly his whole pro career taking on the toughest competition available to him.
Fudosin without a doubt has the experience, but does the Bull have what it takes to keep his undefeated record infact? Either way, i’m excited to see. 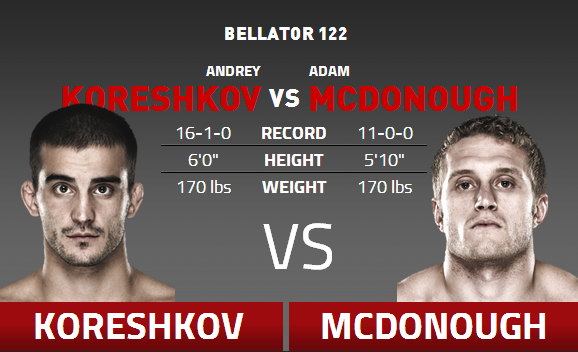 Andrey Koreshkov has been on a tear since his failed title attempt against undefeated Bellator former WW champion Ben ‘Funky’ Askren. With three straight wins including a TKO over Nah-Shon Burrell and a flying knee knockout over Justin Baesman, Koreshkov is clearly very keen to obtain that belt and he will use a flashy arsenal of striking to do so.

Adam Mcdonough at 11-0 as a pro and 4-0 under the Bellator banner with his most recent KO of Nathan Coy is clearly trying to fast track his way to a title shot. Mcdonough holds 9 of his 11 wins via Submission/KO. This is by far his biggest test in the young but experienced Koreshkov and we can expect to see fireworks from the word go. 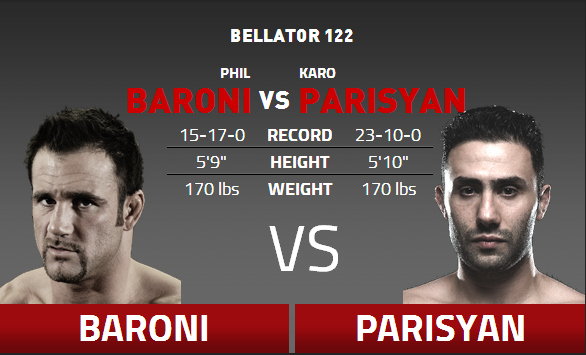 UFC veterans and colourful characters Phil ‘New York Badass’  Baroni and Karo ‘The Heat’ Parisyan are set to do battle tonight. Phil Baroni has come down to the WW division and certiainly is looking in very good shape. Hopefully the ‘Badass’ will come with a fully prepared gas tank as he has suffered with cardio issues in previous fights. Always a very dangerous opponent for the first round he holds one of the most vicious KO wins i’ve seen over Dave Menne. Phil is only 3-7 in his last 10 fights, and went 1-3 with his last promotion, Chinese promotion One FC. Always a fan favourite and fun person to watch and interview, I hope the best for the NYBA. Meanwhile, Karo is coming off a very impressive KO win over Ron Keslar, and he is 4-4 since leaving the UFC in 2010. Karo  is another fan favourite fighter due to not only his in your face personality, but also due to his instrumental use of Judo within his MMA career. A massive fan and friend of Ronda Rousey, Karo for many years was the main representative of the Judo world in MMA. Karo‘s last win over Ron Keslar was very impressive and over a fairly tough oppenent. It will be good to see these well known names battle it out after overcoming personal demons and difficulties. Baroni is coming of a vicious leg injury in his last fight that saw him sidelined for quite some time, whilst Parisyans last fight was in April. 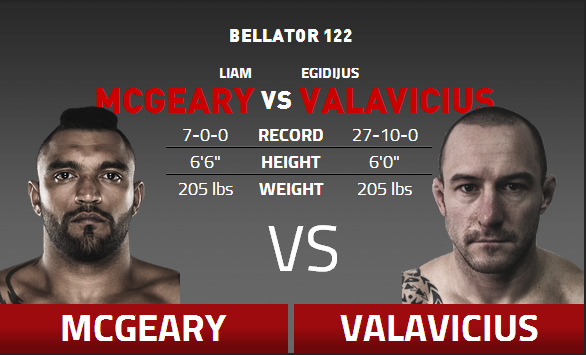 British giant LHW Liam Mcgeary is set to take on Egidijus Valavicius. Valavicius is a Lithuanian veteran who has already fought twice this year. He is making his promotional debut against surging Brit Mcgeary.He is 9-1 in his last 10 fights and 2-0 in Bellator. Training out of Flawless MMA in Lithuania, Valavicius will certainly make a statement if he gets the finish tonight. Mcgeary is 7-0 with 4 of those fights coming under the Bellator banner. All of those fights very finished violently in the first round amassing less than 4 minutes total cage time within Bellator. Mcgeary is a fearsome striker with a capable ground game who at 6ft6 will certainly prove a very difficult and unique challenge for anyone he faces. Between the pair they have a total of 29 finishes in their 34 victories. All of Mcgeary’s wins have been by stoppage or submission 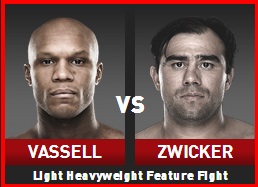 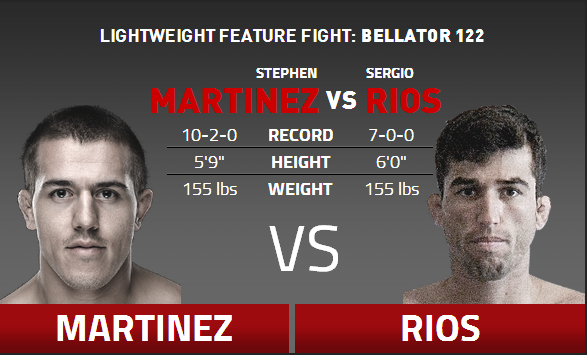 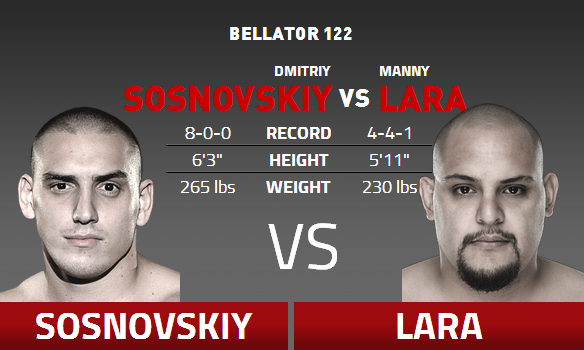 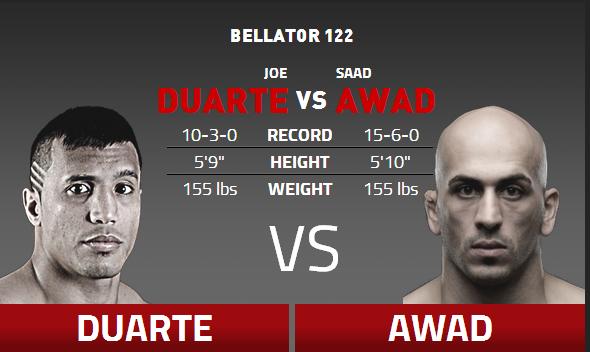 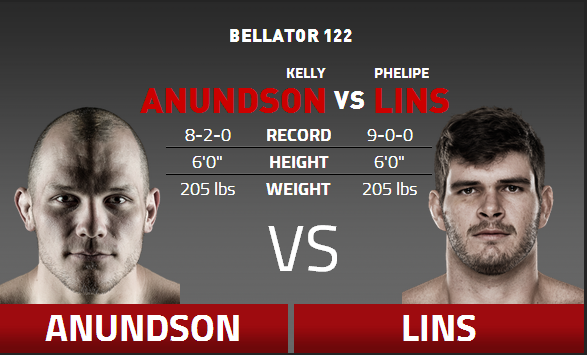 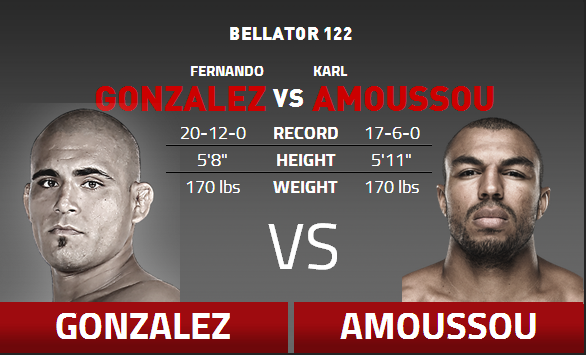 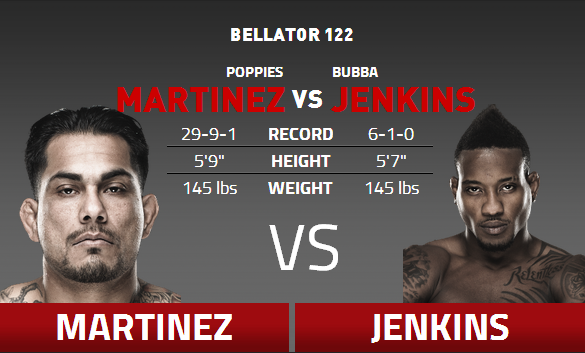 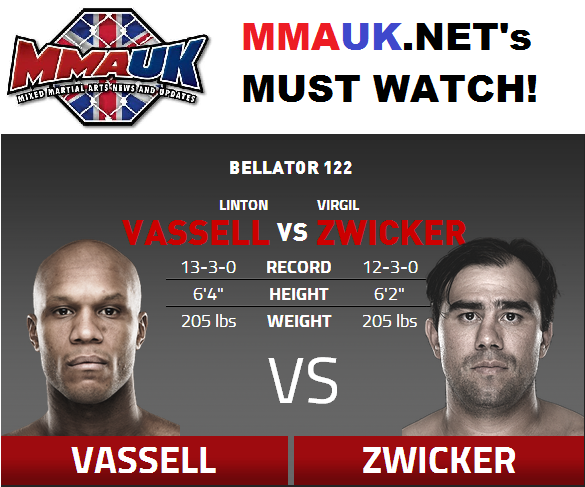 For me there is definately a set of quality prelims in Bellator this Friday but this is our ONE TO WATCH. Britain’s 6ft4 Linton ‘The Swarm’ Vassell is a monster who hasn’t lost since 2010 and has been tearing through all opposition at LHW. Vassell trains like a machine and at the weigh ins yesterday he was in such incredible shape and imposing size that the announcer stumbled his words when he looked at him. Linton is a British fighter who is a massively strong grappler and viciously dominant in top control, which promises to be exciting when matched up against a heavy puncher like Zwicker. Virgil ‘Rezdog’ Zwicker is of American Indian descent and fights through a troubled past to make his way to the big stage. Virgil is a respected veteran of the American MMA scene and a massively exciting fighter to watch. He is on a two fight win streak with his last win being a vicious first round knockout over capable heavyweight Mike ‘300’ Hayes. This is your classic striker vs grappler match up in Zwickers‘ hometown. So the support will be there for Virgil but he has a mammoth task in trying to put away this British beast that is the mighty Swarm. Fireworks all round in this potentially incredible bout! 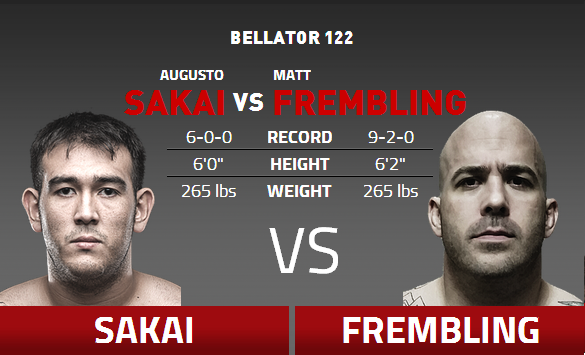 Remember to check out Fightstore Pro for all the best MMA equipment and apparel!

Ronda Rousey Vs. Gina Carano Rumour - The Fight Is Agreed