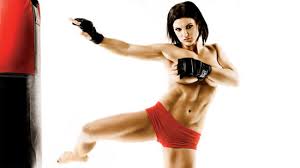 Earlier this week we told you that it was heavily rumoured that Gina Carano would end up under UFC sooner rather than later. Well, there may be more to this story that we originally believed.

UFC president Dana White was asked about the deal at the UFC: Lawler Vs. Brown post fight press conference. He dodged the question slightly, but gave us an idea that there still may be plenty of work left to go before we see he first big star of women’s mixed martial arts back in action on the biggest stage of them all. However he did indicate talks were positive.

It is widely believed that once signed, Carano would go directly into a title fight with the undefeated Ronda Rousey, the new star of womens MMA., However Carano last fought in 2009 before swapping over the bloody mat of a gym for a full-time acting career in Hollywood. But a bout with Rousey would be expected to do major box-office business so it’s no wonder the UFC want to get this deal done.

Will Carano sign and should she fight Rousey first or take on some lesser opponents? Let us know below.

Jose Aldo vs. Chad Mendes To Be Rescheduled For Brazil Event