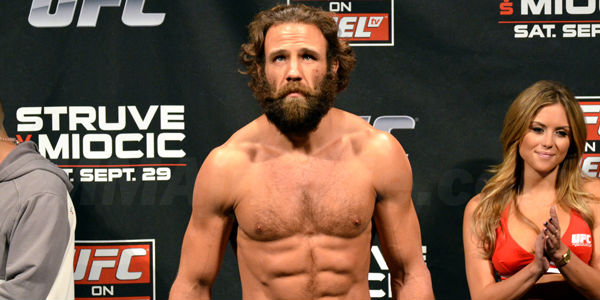 Tonight we saw the last of Kyle Kingsbury. After a 2 year layoff “Kingsbo” returned to the Octagon to meet Patrick Cummins at UFC: Lawler Vs. Brown. What happened over the 15 minute fight was nothing short of an absolutely dominating performance by Cummins.

Cummins  won the bout via unanimous decision and the judges scorecards reflected just how one-sided this fight was with marks of 30-27, 30-25 and 30-24 being called.

Shortly after the fight, the 32-year old Kingsbury was interviewed backstage with much of the MMA media in attendance and made it clear that he no longer felt good enough to continue in the sport of mixed martial arts.

“I’m not sure if it was the time off or the fact his wrestling is so good, [but] I was never able to get comfortable in the Octagon. He set his takedowns well, and I really couldn’t do much to stop them,” Kingsbury said. “That was definitely my last fight. I told everyone I didn’t want to be a .500 fighter, and so enough was enough. It didn’t make sense to get beat up anymore.”

Kingsbury retires with a record  of 11-6 overall. All the family here at MMA UK wish him well in whatever the future may hold for him.