Rumble One Fight Away From Title Contender Status 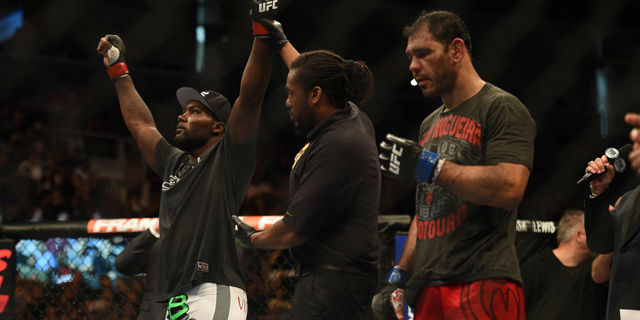 Anthony Johnson impressed last night at UFC: Lawler Vs. Brown after taking just 44 seconds to finish veteran Antonio Rogerio Nogueira in devastating style.  But according to UFC President Dana White he still has at least one fight to go before he can be considered as a title contender

“He still needs another fight to get into that (level),” White explained during the press conference. He continued, “It’s amazing. I don’t think we’ve ever had a guy go from 170 (pounds) to 205 and actually be more powerful and more devastating than he was at 170. I’ve never seen anything like it. I was blown away by Anthony’s performance tonight. He made it quick, and he made it look easy. We’ll get him another fight.”

The praise from the boss is a complete 180 since White criticised ‘Rumble’ just two years ago after he missed weight a third time in the promotion, eventually leading to him leaving the UFC. A moment in his life that Johnson looks back at as a turning point in his career and leading him to become more mature.

Johnson (18-4) and Nogueira (21-6) co-headlined the main card of Saturday’s decision but the fight had badly started when Johnson hurt Nogueira with a well placed right hand, finishing the legendary Brazilian against the cage with a flurry of hooks and uppercuts and Nogueira slumped to the canvas as the referee waved off the fight.

“When you face a guy like Nogueira, you think, ‘OK, this is about to be a battle,’ because the last name Nogueira means a lot,” Johnson said at the post-event presser. “Those guys fight with a lot of pride. I knew I had to finish him or hurt him really bad so the judges didn’t have any second guesses or think that he won. So I’m glad that it ended that way.”

“Rumble,” who now trains with the Blackzilians in was asked who he’d like to fight next, Johnson response, “Everybody.” But he was quick to humble himself and thank the San Jose crowd.