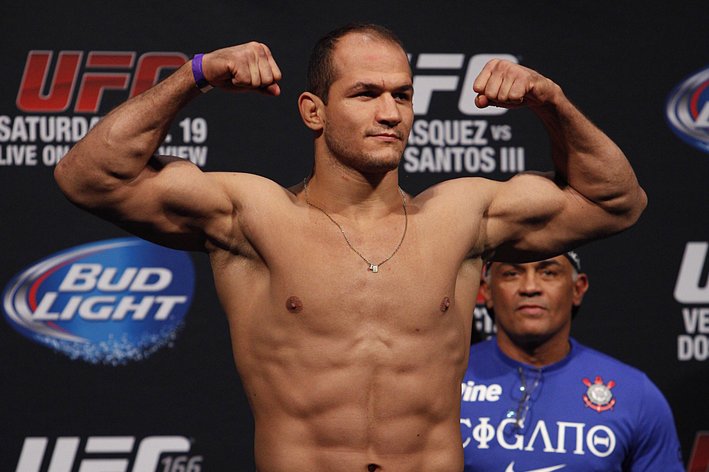 He stranded Stipe Miocic on FOX Sports 1, who went on to flatten Fabio Maldonado.

The good news is, both fighters are still interested in squaring off, and “Cigano” told MMA Fighting that he’s planning on a November return. If Miocic is ready, willing, and able to wait that long, the Brazilian expects a “beautiful fight.”

“I saw this October card in Rio as a possibility, but my coaches think it’s too soon to be back because I’m not even training hard yet and I need to re-adapt myself to training before starting a camp. October would be too early for me. I will schedule my next fight when I feel 100 percent ready. I talked to Joe Silva and explained everything to him, and I’m positive that I will be ready to fight again in November. Miocic is doing a good job, coming off great wins. I was focused on fighting him before, trained for him, so I think it would be a good fight for me. It would be a beautiful fight for the fans as well.”

Dos Santos (16-3) has been alternating wins and losses following his first title defense back in 2012. After stopping Frank Mir at UFC 146, “Cigano” suffered a crushing defeat to current heavyweight champion Cain Velasquez. A sensational head-kick finish against Mark Hunt at UFC 160 set up a trilogy, but he once again came up short in his quest for reclaiming the crown.

Now he’ll have to wait just a little bit longer before slugging his way back into the win column.

Who has missed seeing JDS fight since he has been out with injury? Do you think Stipe is a good match for JDS on his return to the UFC in November?