Luke Rockhold: There’s No Way In Hell Weidman Vs. Belfort Will Happen 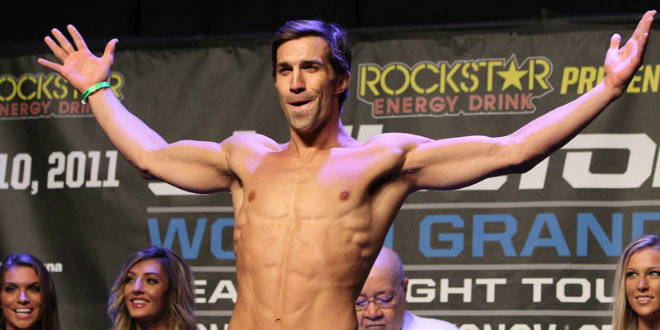 In an interview with Bloody Elbow, Luke Rockhold spoke on a multitude of topics including his thoughts on Vitor Belfort’s recent licensing , the chances of Chris Weidman Vs. Vitor Belfort actually happening, his desire to put an end to Michael Bisping’s call-outs and information: Check out the interview below:

That licensing is questionable. Is the fact that he cried supposed to make us feel sorry that he’s been a lifelong cheater? He’s pretty much a pathological liar. He should really consider taking up acting. Maybe he should read for the next Expendables movie. He’s pretty much enough of a mutant to fit right in there.

It hurts my heart that guys like Vitor get rewarded for their conscious mistakes, but Karma is going to get him sooner or later. He can only skate by for so long.

As tempting as it would be, I’d rather not make the path to the title any longer than necessary, so I’d want a straight go at Weidman over avenging that loss to Belfort. Here’s my opinion; there’s no way in Hell Vitor makes it to this fight. Something is gonna happen that prevents it.

He’s either going to get off steroids, train and then get injured because he’s not on them anymore, get caught for PEDs, or he’s going to back out with an “injury”. One of those things is going to happen, and Vitor Belfort is not going to make it to his fight.

When one of those scenarios happens, I will be ready to step in. I tweeted it the other day, and I meant it. The fight is a good ways away, and anything can happen, so I’ll be ready to go.

I wish I knew what was going on with him. I mean, the guy just comes out of nowhere. He needs to be focused on Cung (Le). He’s already only got one eye…he can think about as well as he can see. I’m pretty sure he’s been hit in the head one too many times.

I pray that guy can win a fight. Cung is my friend, and I honestly don’t think Michael can win this fight, but I really just want a chance to shut his mouth. There’s not too many people that would be as satisfying a win as Bisping.

Even if he loses to Cung, and becomes completely irrelevant, I’d still take a paycheck to beat him up. I begged the UFC for that fight. I wanted it so bad, but they would not give it to me. There’s two guys on my list. Vitor is number 1 and Bisping is a very close second.

I think that sometimes we don’t communicate ourselves the way we intend to. I don’t think he meant to slight anyone with that statement. It was fight week and sometimes you’re just not thinking straight. The things that you want to say don’t always come out the way your brain intends them to [laughs].

I don’t fluctuate as much as people think. I’m probably about 205 right now, out of fight camp. I mean I’ve gotten to 215, but I really like to stay under 210 pounds.

As far as my weight on fight day, I’m a big believer in putting back exactly what I took off. Most of these guys train their whole camp at a certain weight, and then about 2 weeks prior to their fight, they start dropping weight. Some of them make 30 or 35 pound weight cuts, but only put back 16-18 pounds. Any more than that and you get sluggish.

They’ve been training at 10 pounds above what they’re going to walk in and fight at, which makes no sense to me. I want to make everything the same as the training room. I want to train at my fight weight, and I am walking at that weight at least 3 weeks prior to the fight.

By the time I make my weight cut, I’m about 15-17 pounds over. My target is typically 202. I cut that weight for weigh-ins and by fight time, I’m back to 202. I think you’ve got to be within a 20 pound realm, otherwise, it just starts to hurt you, especially later in the fight.

I think body work is completely under-utilized in MMA, especially from a southpaw stance. It’s so easy to attack the liver and the body. I honestly don’t understand why so many southpaws don’t use that to their advantage, especially when fighting an orthodox fighter. You have to attack everywhere. People get too caught up in the head and leg kicks, no doubt, but those body kicks to the center and sides can be just as lethal.