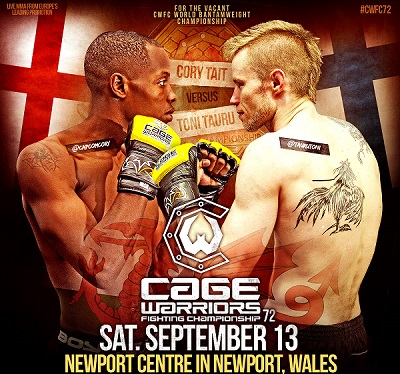 I’m massively excited to see Mario return to the cage, I can tell you I know a lot of fighters, and I do not know many who have been training as hard as he has. His work rate is incredible, everyone who is around him knows he is taking it to a whole new level and I hope Jamie Rogers will be ready to face him come September. Standing in Mario’s way will be Cardiff’s own Jamie ‘Dogs of War’ Rogers (9-7).

Rogers has fought in Cage Warriors for 4 years and faced some of their best in the likes of now UFC fighter Cathal Pendred. Rogers has a high finishing rate, which comes in a mixture of submissions and knockouts. He is coming off a loss to Sam Gilbert via Triangle in September 2014, although before that he defeated a tough Brad Wheeler via split decision.

Mario is coming off a close decision loss to Sean Carter in a fight that he took on very short notice. Prior to that he won the Ultimate Impact Lightweight title via Unanimous decision over Leon Rosser and defended it against the well-known and durable submission wizard Wayne Drake. Mario is well-known as being very dangerous with his grappling game having 4 submission wins all via armbar. Though the ‘Rudeboy‘ has been training his hands extensively with notoriously respect coach Paul Sutherland, and in the same way that Ronda Rousey went from armbarring everyone who got in her path, to now viciously ko’ing each opponent. Well lets just say I wouldn’t be surprised if the arm collector became the soul collector with a string of vicious knockouts.

Either way I’m very happy to see Mario finally have his fight announced as I know he has been training incredibly hard and is desperate to go to war. He has a very solid Cage Warrior veteran standing in his way in Jamie Rogers, this promises to be an explosive fight and a potential fight of the night candidate.