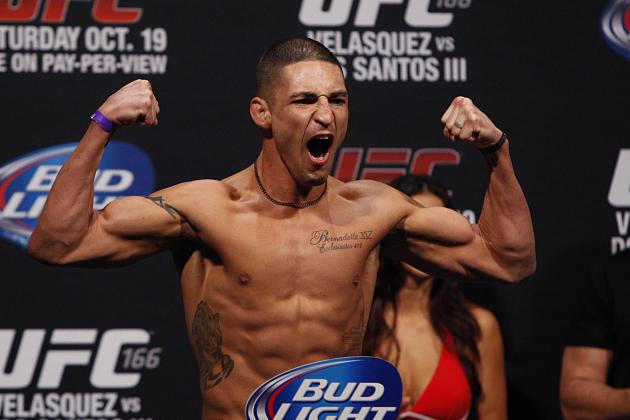 When you garner the kind of attention and hype that UFC Featherweight rockstar Conor McGregor (15-2) has, you become a target for many fighters, especially those you have called a “brain-dead, stuttering fool”. The ‘fool’ Conor was talking about? None other that UFC-vetern and Ultimate Fighter Season 1 winner Diego Sanchez.

Sanchez (25-7) was a recent guest on Submission Radio and made it clear he hadn’t forgotten about the trash talk. He’s even considering a test cut.

“I would love to fight this guy and he said he’d like to fight me too, so I definitely think it’s possible. I think he’s a great mixed (martial artist). I think he’s really talented, I think he’s really tough, I just don’t agree with people going out there and thinking that, this guy thinks he’s like the Anderson Silva, he claims that he’s the ‘GOAT,’ and I’m just like ‘C’mon man, you ain’t done enough to claim that.’ You know, I’m all for believing in yourself, but he’s taking it to the next level, and if he gets past Dustin Poirier then he’s definitely on that level, but you know he has that next tough fight. But if we get a fight, then we get fight. I’ve even possibly thought about going down to 145 just to fight him. Like as a matter of a fact, yesterday I was in my gym working out, and I was like ‘can I do it? Can I make 145?’ I was like ‘I don’t know, I might have to try. I might have to do it.’ Then I was like, but would it be worth it for one fight, to go down to 145? Would it really be worth it? I was like ‘I’m gonna have to do like a 10-day fast, I’m gonna have to really sacrifice to get down to 145. I’m gonna have to lose some muscle.’ And I was really giving it some serious thought, I’m like ‘but what if I’m stronger, what if I’m stringy. I’m gonna be long and stringy at that weight.’ I was seriously giving it some consideration, and it’s not out of the question. It’s definitely not out of the question.” – Diego Sanchez on Conor McGregor

However McGregor has other fish to fry first with his biggest test yet,  taking on Dustin Poirier at the upcoming UFC 178 event, headlined by Jon Jones and Daniel Cormier. A victory there and Conor could cement himself as a true contender and earn a potential shot at the champion.

But even without that, a fight against Diego Sanchez could be seen as a backwards step for McGregor who has seen himself become a household name after going 3-0 in the UFC since arriving in early 2013. Diegos not exactly riding a wave of victories himself. Going 1-2 in his last 3. That sole win coming against Ross Pearson in a fight many are calling the robbery of the year.