Beef Is Brewing Between Cub Swanson And Frankie Edgar’s Camp 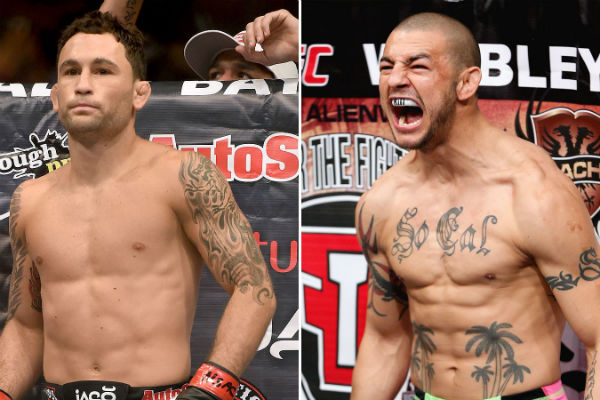 It seems a little bad blood is forming between Cub Swanson  and Frankie Edgar due to a recent announcement from camp Edgar that a fight between Frankie and Cub was in place. The bout was announced as a December match up, but the two fighters had never been booked to square off against each other.

The beef seems to be more so between Cub and Frankie’s management team. Swanson described Edgars teams actions as “shady”.

There is a show booked in December UFC ON Fox 13 At the U.S Airways Centre in Phoenix, Arizona. Soon after this show was announced was when the rumours of  Edgar VS Swanson started to appear, which seemed to be aided by Team Edgar’s tweets. Frankie Edgar himself made this below statement about fighting Cub.

“I think I’m probably his toughest fight, his toughest out, his toughest way to the title. But if you want to be the champ, you’ve got to go beat everybody. If he doesn’t fight me now, he’s going to have to fight be sooner or later. Might as well get it done now. We’ve got time. I think it’s the fight that makes the most sense. To sit around and wait for those guys to fight? I think this makes more sense.”

“Ali suggested that fight, and it seems like it’s gotten a great response in social media. Let’s give the fans what they want: I’m ready to fight the best. I know if I want that title, I’ve got to fight everybody in front of me, and Cub’s that next guy, so let’s make it happen. I’m not one to really talk junk. I’m just saying what it is. Let’s do this. I think he said a little while ago he wouldn’t mind punching me in the face. You can’t punch me in the face unless we fight. Let’s fight. He’s been saying some things, and then when it comes down to fight, we don’t get to fight. I think I’m going to be the guy to fight for that title next, and I’d like to get it done with Cub first.”

What do you guys think? Is it Cubs time for a title shot, or would a fight with Edgar solidify his position as a contender?

Let us know in the comments below