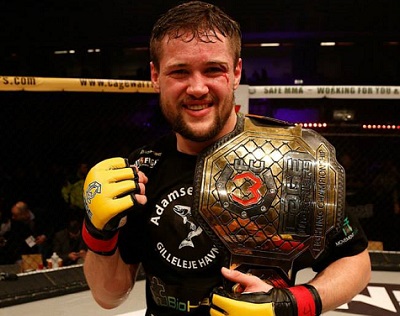 CWFC welterweight world champion Nicolas Dalby will put his belt on the line for the first time on Saturday, September 13, 2014.

The undefeated Dane is set to take on Gael Grimaud when Cage Warriors Fighting Championship heads to the Welsh city of Newport for CWFC 72.

Tickets for Europe’s leading promotion’s eleventh event of 2014, which is to be staged at the Newport Centre, will go on sale shortly.

CWFC 72 will also feature a bantamweight world title tussle, as Cory Tait and Toni Tauru clash for the vacant 135lbs strap, as well as a host of other exciting bouts.

Following his spectacular fourth-round KO of Sergei Churilov at CWFC 66 in Copenhagen this past March, Dalby (12-0) will be making his inaugural title defence in Newport on September 13.

His thirteenth professional outing will provide a new challenge for Dalby, as he competes outside of his native Denmark for the first time in his career.

The 29-year-old, who succeeded Cathal Pendred as the CWFC champion, holds other notable wins over Ivica Truscek, Morten Djursaa and Glenn Sparv.

“I’m very much looking forward to squaring off against Gael Grimaud as he was the latest fighter currently on the CWFC roster to hold the welterweight title,” said Dalby.

“He has a very dynamic style that I find quite interesting, so I’m looking forward to showing off how I will dismantle him and get the win.”

Grimaud (19-6) will be aiming to regain the CWFC welterweight world title, which he relinquished in March of last year following a unanimous-decision loss to Cathal Pendred at CWFC 52 in London. 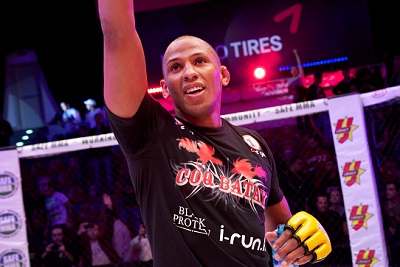 A 34-year-old Frenchman who has dropped just one loss in his last 11 fights, Grimaud has taken fifteen of his nineteen professional wins by stoppage, including 12 submissions.

However, Grimaud’s most recent CWFC outing saw him score a KO win against Bruno Carvalho after just 45 seconds of their main-event clash at CWFC Fight Night 9 in Amman last October.

Grimaud clinched the CWFC welterweight world title back in September 2011 when he overcame Arni Isaksson, before going on to make a successful defence against Jesse Taylor.

“To have the opportunity to get the Cage Warriors belt back is very exciting for me and I am determined to succeed,”

“My opponent brings a strong challenge but I believe I am a better fighter than him. I will be ready on September 13 to take that belt back home again.”

Dalby and Grimaud were originally scheduled to meet for Cage Warriors’ 170lbs strap at CWFC 66 but an injury to Grimaud resulted in the title shot passing to Sergei Churilov. 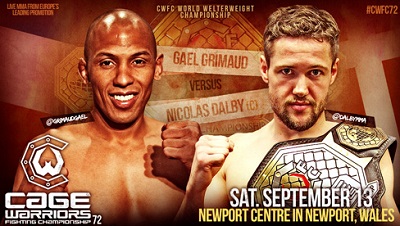