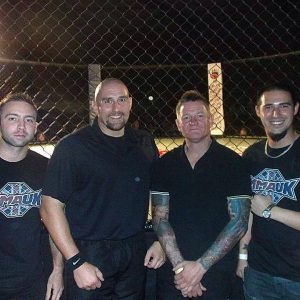 This week we have a special edition of our regular ‘Featured Fighter Friday‘!

Every week we have been taking an insight into a British fighter and having a look into their history, recent form and what to expect from them in the coming months! This week, we have gone outside of the box and are delighted to have caught up with British MMA refereeing legend, Leon Roberts!

When we caught up with Leon, we had some great questions to ask him with some brilliant answers that will give you a great insight into his life and how he came about doing what he does best – refereeing MMA.

Leon was born on 11/05/1974 and raised in Gloucester. We caught up with Leon by asking him some questions about his life.

MMA UK: Hi Leon. It is great to have a chance to catch up with you and let us and the MMA fans get to know you a bit better. Firstly, where did you grow up and attend school?

Leon Roberts: I lived in Gloucester all of my life. I attended primary and secondary schools in Gloucester and then went on to attend university in Cheltenham.

MMA UK: Whilst growing up, did you personally do any combat sports that inspired the career in MMA?

Leon Roberts: I competed in rugby, football and swimming growing up. I never did any traditional combat sports.

MMA UK: Growing up, did you have any particular fighting idols?

Leon Roberts: In sport it was all about boxing. Mike Tyson, Evander Holyfield, Marvin Hagler, Thomas Hearns and Nigel Benn. They were my favourites and of course, the great Ali. I was also a massive fan of Bruce Lee. In the movies, I was hooked on Rocky with Stallone and movies featuring Steven Seagal and Van Damme.

MMA UK: What was it that got you into the MMA scene?

Leon Roberts: I was always a big kid and alot of the time this meant that I avoided confrontation which was a good thing, but I was always curious if I could handle myself in a proper fight against someone who knew what they were doing. I worked in a video store and when the UFC started getting released I used to hide them and bring them home at the end of a shift and watch over and over. I heard about a local fighter, Mark Weir, and so me and a friend went to one of his classes. The classes involved kickboxing, grappling, self defence, weapons and reality sparring. Over 20 years later, I still train with the same teacher. The days of the old gym wars are gone but my body still bears the scars of these encounters as I’m sure many old school martial artists will know all too well.

MMA UK: Did you always want to be a referee or did you have any visions of fighting yourself?

Leon Roberts: I had a serious injury which required surgery and this kept me out of training for the best part of a year. By this time I was addicted to MMA and so would go to the club and watch to keep my mind active and after a while I would start to time spars and start to call out instructions. This soon led to me taking sessions. When I was able to train again, I had almost by accident fallen into a trainer/coaching role which I loved and so any thought of fighting myself was put to the back of my head. I would never go so far as to call myself a coach or teacher, but I helped train over 25 fighters as well as cornering all over the country, and the world. During this time I was involved in XFUK which was a management team looking after Mark Weir and to raise fundsl we put on a show in 2002. The team asked me to ref based on my knowledge of the sport and so I agreed to help save costs. As they say, the rest is history. 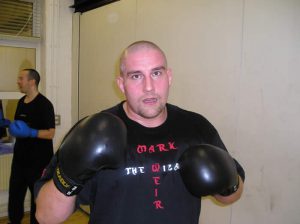 MMA UK: What training have you done?

Leon Roberts: Trained under Mark Weir and his range fighting system, achieving a black belt instructors grade. For the past 18 months I have been training BJJ with my coach Ali Mason under Gracie Barra and am currently a blue belt.

MMA UK: As you are still training, what would your weekly schedule consist of?

Leon Roberts: Monday – Strength and Conditioning. Tuesday – BJJ with either a session of weights or a session of No Gi Jiu-jitsu. Wednesday – Weights.  Thursday – Kickboxing and weights.  Friday – MMA and weights. Saturday – BJJ (if i have no show to referee etc). This is in an ideal world, sometimes work commitments and family matters mean this can be limited.

MMA UK: Apart from the UFC, which other promotions are you involved with?

MMA UK: Do you have any particular fights that you have refereed for that you consider to be your favourite?

Leon Roberts: The fights that mean the most to me are the fights that I consider to be “firsts” in some way. So, UFC 89 – Per Eklund vs. Samy Schiavo was my first UFC bout and the first time a UK ref had officiated for the UFC.  UFC Fight Night 19 – CB Dollaway vs. Jay Silva was the first bout I officiated in the US. UFC 122 –Nate Marquardt vs. Yushin Okami was my first UFC main event and UFC on FX 2 – Demetrious Johnson vs. Ian McCall was the UFC‘s first ever flyweight contest, and I had the honour of officiating this one.

MMA UK: Do you have any favoured fighters that you love to referee for?

Leon Roberts: I am a fan of MMA and as such, I have fighters I love to watch. I would never say who my favourite fighters were as this may cause some people to question my integrity and professionalism if I was to referee them. 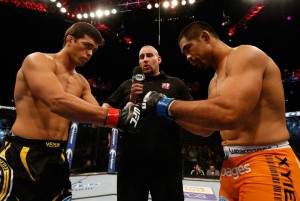 MMA UK: What is coming up for you with regards to future events?

Leon Roberts: UCMMA in London on 6th September. UFC in Tokyo on 20th September and Ultimate Impact on 15th November. The UK has alot of refs, many of who are well respected and have long standing relationships with promotions so my diary is never that full. Infact, I am probably one of the least active refs in the country. Unfortunate as I would love to referee more. I love being around MMA. I’ts not a hobby for me and it’s not a job – it’s a lifestyle, and so I even work commission for BAMMA from time to time.

MMA UK: Where do you personally see the UFC in 5 years time and can you see the addition of any more rules?

MMA UK: Are there any lower ranked fighters that you have been involved with that you see as big prospects for the future?

Leon Roberts: The ‘grass roots’ shows in this country (when done right) are awesome and a real pleasure to work on. Some of the most entertaining fights I have seen and officiated have been on smaller shows. I love being part of these shows. I have seen plenty of future prospects. Amateur MMA right now in this country is in my opinion, at an all time high. This is down to committed and knowledgeable coaches, trainers and clubs, and a professional work ethic from these young fighters. I would love to name some of the talent I predict big things for but again in doing so my professionalism and integrity may be questioned when I officiate these guys. Being an MMA ref is hard enough!

MMA UK: What do you enjoy to do in your spare time?

Leon Roberts: Spending time with family and friends is what I love to do when not working. I have two boys aged three and almost five, so playing in the park, the woods, softplay, bike rides etc  is always something we do. My wife loves entertaining so the house is often full with our friends and their kids plus loads of food and fun. I have to admit, I like playing cards and dominoes with my folks and my brother, gambling for pennies! I guess I could be classed as old and boring because if it is a choice between hitting the pubs and clubs on a Saturday night or chilling with my wife and kids, watching a movie together and having popcorn the latter always wins! 🙂

We would like to thank Leon for his time in sharing with us an insight into his life, his views on MMA and also giving us a small glimpse into his private life! We look forward to catching up with him at future events that we are both involved in!

Thatch Forced To Withdraw From Fight Due To Graphic Injury