Brock Lesnar UFC Return A Possibility According To Manager 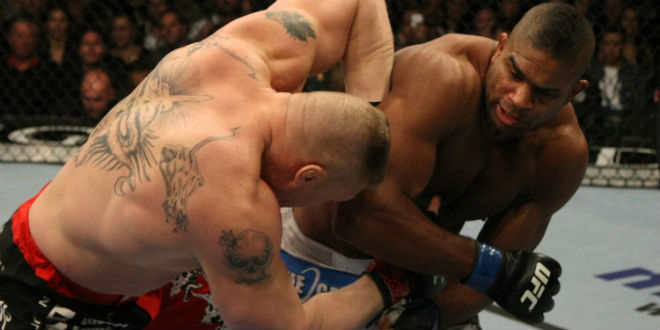 Brock Lesnar hasn’t stepped foot in an MMA cage since 2011 after losing to Alistair Overeem. Instead he retired from MMA and took up a job at the company that made him a household name, pro-wrestling giants WWE. Most agree this wasn’t the most satisfying way to see Lesnar walk away from the sport after the huge impact he had on it. However, could a return be on the cards? According to sources, it may be possible.

Brocks friend and longtime manager Paul Heyman revealed on “The MMA Hour,” that Lesnar had finally gotten his diverticulitis in order and has a clean bill of health.

“He had a clean bill of health, finally. Brock was not ready for the Overeem fight, and I think that’s fairly obvious. A liver kick, well placed, will drop any human being on the face of this planet. A liver kick from Alistair Overeem, at that size and weight — no matter how he achieved it — is going to drop any human being. Brock was unhealthy walking into that fight with Alistair Overeem. I don’t think that Brock has ever truly understood nor accepted until he got past it, the severity of the illness that took him down. Brock, once he got past the Overeem fight, had all these treatments, switched treatments and doctors and finally got a clean bill of health.” – Heyman explains

Heyman says if the circumstances were correct, Brock would consider a return, but not at the moment due to his success in the WWE.

“If a change of circumstance happens, and it’s a no-brainer to get Brock back into the cage, I’m sure it’s something he would consider. At this moment, it’s not a topic of conversation because things are going so well in WWE.”

While I’m sure Dana White and the rest of the management at the UFC would welcome back the guaranteed PPV numbers, the fans may be a litter harder to convince. Many of whom still feel Lesnar was gifted his success in the UFC.

Would a Lesnar return excite you or should he still to pro wrestling?