In this series of upcoming articles Fightstore Pro and MMA UK.net will be taking a close look at the top MMA gyms in the U.K. We will be reporting on gyms that we have researched in depth and that we believe are hatching the latest phoenix’s to trailblaze the Mixed Martial Art World.

Headed by owners Dan Richards (Worcester) and head coach/owner Paul Sutherland (Cheltenham). Trojan Free fighters has been established for over a decade as a Mecca for fighters in the Cheltenham and Worcester areas. Originally started in Cheltenham as a prominently Muay Thai based boxing club, it quickly developed into a place that covered all aspects of MMA. Some would say they were ahead of a lot of other U.K gyms as well. Trojan Free Fighters had great early success and nowadays is headed by Paul Sutherland running Trojan Free Fighters in Cheltenham, Dan Richards runs Trojan Free Fighters in Worcester. Trojan Free Fighters gained a lot of respect through their partner promotion Ultimate Impact. As owners of Ultimate Impact and Trojan it would have been easy for them to give their fighters easy fights to pad their records. However, the strict and honourable work code of Paul and Dan means in-fact, they search out the hardest and best competition to pit their fighters against. This has gained them further respect and recognition in the MMA community, as well as giving their fighters a realistic overview of where they are at in their experience. Trojan free was initially set up set up by Charlie Joseph. 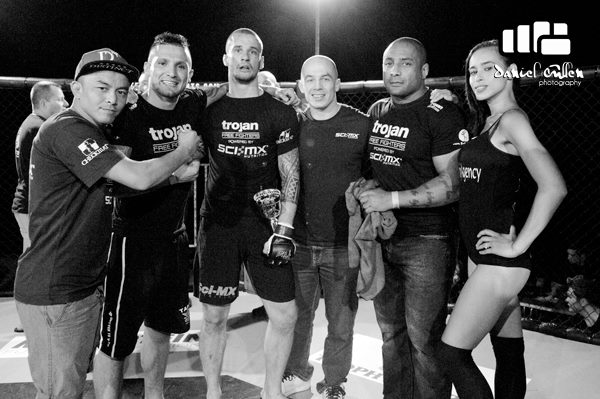 I have spoken to a few of their fighters and asked them a few questions about TFF. Firstly I spoke too Cage Warrior Mario Rudeboy Saeed and asked him –

GS – How long have you been with Trojan Free Fighters and how have you developed since being with them?

Mario – ‘I have been with Trojan since day 1! I’ve learnt so much from them, the level of training is very very high and everyone wants to prove to the coach they are better than one another. It is healthy rivalry though because we just use it to push each other, it’s such a blessing to have an amazing gym, team and fantastic coach.’

Mario Saeed I also spoke to another young fighter who I recently watched cage side at Ultimate Impact 12 where he lost a very close decision to a tough opponent in Toby Hartman, Chris Astley. I asked him about how long he’s been with Trojan how he came about and his progress.

Chris – ‘I joined Trojan Free Fighters 2 years ago this month. My good friend Mario Saeed took me there too train, I had a feeling he just wanted someone to beat up in the gym! Since I’ve joined Trojan my life has changed more than I could ever have imagined when I started 2 years ago. Paul Sutherland has always supported me and has been an inspiration seeing his work rate first hand. Matt Ewin and all the other coaches at Trojan have also really pushed me and believed in me sometimes more than I believed in myself. I can’t say enough good things about Trojan, I love my team, they are great training partners who are happy to support you as well as punch you all day.’

All the Trojan Free Fighters I have spoken too say the same thing and a lot of it comes back down to a very inpsiring coach in Paul Sutherland. I asked Paul his opinion on what makes his brotherhood of fighters so successful. ‘In my honest opinion I think there are many high quality teams in the uk and I am glad that Trojan Free Fighters is up there with them. We have strength in depth in every weightclass, A good coaching staff and the fighters have good attitude and work ethic.’ Professional and to the point, there’s no razzle dazzle it’s down to hard work and dedication. At Trojan Free Fighters the passion burns very deep and that is what results in their depth of quality. Passion, drive, ambition, success