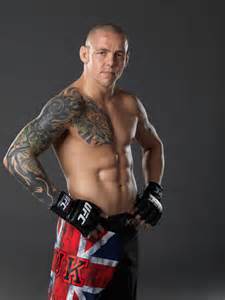 Friday’s featured fighter this week is Ross Pearson. He is an English fighter currently competing in the Lightweight division of the UFC and has a record of 15 wins and 7 losses. He has a Black belt in Tae Kwon Do, Brown belt in Judo and a Blue belt in Brazilian Jiu-Jitsu.

Pearson, born and raised in Sunderland began  training in Tae Kwon Do at the age of 6. When he was in school he started judo and boxing. At 17 he started MMA and trained to be a bricklayer.

Pearson got his big break when he defeated A.J. Wenn by knockout in an elimination match earning him a trip to Las Vegas to compete on The Ultimate Fighter show United States v United Kingdom. He fought all the way to the final where he would face up against his teammate and former MMA UK Friday Featured Fighter Andre Winner.

Pearson fought Winner on 20th June at the TUF Finale in Las Vegas. He won the fight by a unanimous decision along with a 6 figure contract.

He won his next two fights against veteran Aaron Riley and Kickboxer Denis Siver and in the latter earned fight of the night giving both fighters 30 thousand dollars.

Pearson was then submitted by Cole Miller before beating Spencer Fisher but then he suffered another loss to Edson Barbosa
and then going onto defeat Junior Assuncao. He then faced Cub Swanson and lost the fight via TKO.

In July 2012 Pearson was the coach for the TUF.  The Smashes Pearson faced George Sotiropoulos in Lightweight bout on the 15thof December 2002.  He won the fight via TKO in the third round.  After that he defeated Ryan Couture via TKO in the second round.

Pearson then faced Melvin Guillard on the 26th of October 2013.  The fight ended a no contest when Pearson was deemed unable to continue after being cut on the forehead by an accidental illegal knee.

Up next Pearson faced Diego Sanchez and was robbed of the win by the judges who awarded the fight to Sanchez via a split decision.  13 of the 14 media score cards had the bout 30-27 Pearson while the 14th had  Pearson winning 29-28.

Pearson was expected to face Abel Trujillo on the 16th of August 2014 at UFC Fright Night 47.  However, on August the 4th, Trujillo pulled out of the Pearson bout and was replaced by Gray Maynard.

Ross Pearson has an extra incentive to beat Gray Maynard as he is getting married next month.  He is hoping to win so that he gets a nice big pay cheque to pay for it all and is praying that he doesn’t get any black eyes to ruin his big day.

Let’s all hope that Ross brings home the win and can put a streak together and then challenge for a UFC title.