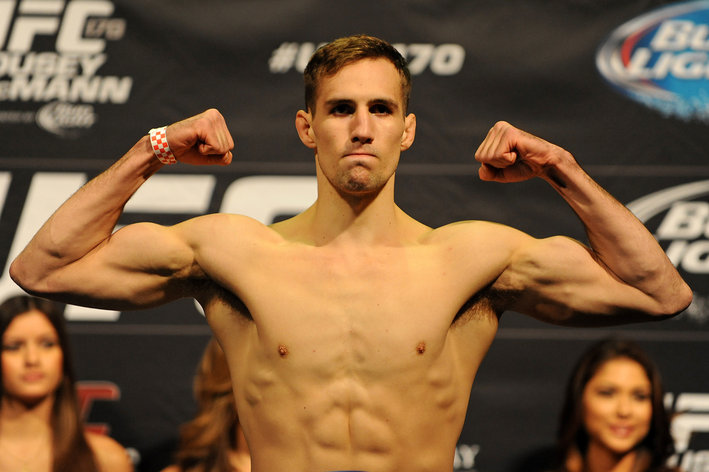 After plenty of lobbying, Tarec Saffiedine got just what he wanted, a chance to fight top UFC welterweight contender, Rory MacDonald, in a fight set to go down at the UFC Fight Night 54 event in Halifax, Nova Scotia, Canada, on October 4th 2014, on FOX Sports 1.

And though Rory admits he doesn’t pay too much attention to people who challenge him, much less lower-ranked opposition, the “Sponge” call out only caught his attention after friends told him about it, which was subsequently followed up by a phone call from Joe Silva.

Rory says that Tarec is just one of many welterweights who are often choosing to pick a fight with him. While some might be bothered by it, Rory relishes it, since all it’s doing is preparing him for the onslaught of call outs that are sure to come his way once he’s the king of the welterweight hill.

Which will be very soon, according to his comments on The MMA Hour:

“I didn’t really think too much about it. I got a call from the UFC and they told me that’s who they wanted me to fight next. I think there are a lot of guys that ask for a fight with me for some reason. I think it’s a good thing, because very soon, I’ll be at the top of the hill, then everyone will be gunning for me. So, it’s a good thing people want to fight you in this business. I don’t really care. My focus is to fight for the championship and I don’t really care about people who are ranked below me. I want the belt. If other people’s focus is to call me out, that’s on them.”

When Georges St-Pierre walked away from mixed martial arts (MMA) and his UFC welterweight title a few months back, many believed Rory would soon step into his teammate’s championship shoes.

Unfortunately, “Ares” suffered a decision loss to Robbie Lawler at UFC 167 — which just so happened to be the same night of “GSP’s” final fight — putting his future title hopes on ice. Eventually, Johny Hendricks went on to defeat the aforementioned Lawler at UFC 173 four months later to capture the vacant crown.

As for Rory, he’s gone on to win two straight against Demian Maia and Tyron Woodely. A win over “Sponge” will undoubtedly solidify him as the next contender at 170 pounds and will earn him a fight against either current champion Johny Hendricks or next challenger Robbie Lawler.

Regardless of who it is, “Ares” is confident he’ll make a statement and rule the division for a very long time. But first, he must go out and put on a “dominant performance” against the former Strikeforce welterweight champion in front of his hometown crowd.