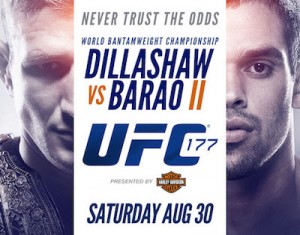 Dillashaw dethroned Barao, who had a 33-fight unbeaten streak with three consecutive title defenses, at UFC 173 in May. Barao closed as nearly a -1000 favorite, yet Dillashaw bucked the odds and pulled off the upset with a thoroughly dominant fifth-round TKO.

It’s no surprise why one of UFC 177’s taglines is “Never Trust the Odds.”

It was an emotional win for Dillashaw and his teammates at Team Alpha Male, who finally added a UFC champion to its ranks.