Cub Swanson – Does he have the answer?

It has been announced that the headliner for UFC Fightnight 57 in Austin, Texas will be  #2Cub Swanson vs #3 Frankie “the answer” Edgar. The event will take place on 11th November, just later this year. With Swanson on a 6 fight tear and a place above Edgar in the featherweight pound for pound rankings, it’s a wonder why he took the fight and didn’t wait to fight the winner out of Jose Aldo vs Chad Mendes 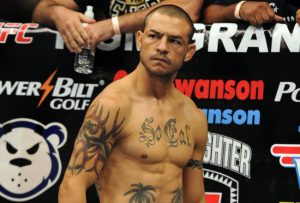 . Swanson is 6-1 in the UFC with 4 of his 6 wins by KO/TKO. Will he be able to get past the tough Frankie Edgar? Edgar is known for his iron chin and tremendous heart as he has displayed many times against highly ranked opponents. Does Cub Swanson have “the answer”?