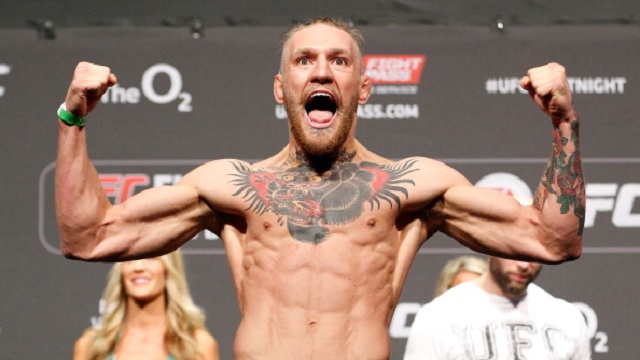 Conor McGregor is currently the biggest and most hyped athlete ever to step foot in the octagon. At UFC 178 McGregor beat Dustin Poirier in the first round with a performance of the night which might just have set him up for a title shot. Whilst others debate whether he deserves a title shot, MMA UK is going to profile the fighter from his very humble beginnings.

Conor Anthony McGregor was born in Dublin Ireland in 1988 and began training at a very young age. He went on to become a national champion in boxing. He trains in the Straight Blast Gym and his style incorporates moves from caponeira, karate and taekwondo mixed in with his boxing and muay thai.

In his early career, McGregor amassed a record of 12-2 between 2008-2012 and became Cage Warriors featherweight champion and lightweight champion which made him the first Irish fighter to hold titles in two separate divisions.

In February 2013 with a considerable amount of hype already,  McGregor signed for the UFC. He is only the second fighter from the Republic of Ireland to fight for the company following Tom Egan.

At UFC on Fuel TV 9, McGregor made his debut against Marcus Brimage winning via TKO just over a minute into the first round. He also earned his first ‘Knockout Of The Night award. He was then expected to fight Andy Ogle, but Ogle pulled out of the bout citing injury and he was replaced by Max Holloway. In the events surrounding this fight was the focus of a documentary featuring McGregor himself who eventually beat Holloway by unanimous decision but following the bout an MRI scan revealed that McGregor had torn his ACL during the fight and required major surgery.

UFC Ireland July 19th 2014 is being hailed as the greatest UFC event ever. The atmosphere was out of this world. McGregor was expected to face Cole Miller, however Miller pulled out with a thumb injury and was replaced by Diego Brandao. McGregor won the fight via TKO in the first round and won the ‘Performance Of The Night’ bonus award.

That win set him up for his dazzling display against Dustin Poirier and he now finds himself a step closer of reaching his goal of becoming UFC Champion. McGregor now has a record of 16-2. He has also stated that once he cleans out the Featherweight division he will step up to the Lightweight division to do the same.

McGregor is young, arrogant, brash, annoying,entertaining, funny, in fact he is many things, and that’s what makes him so intriguing and that’s why Dana White described McGregor as bigger than Brock Lesnar and Georges St-Pierre. Love him or hate him the McGregor hype train shows no signs of stopping or slowing down yet!