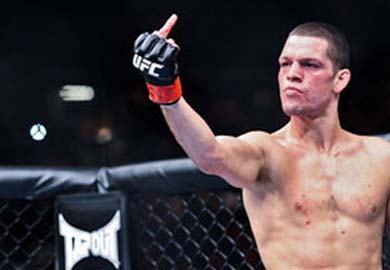 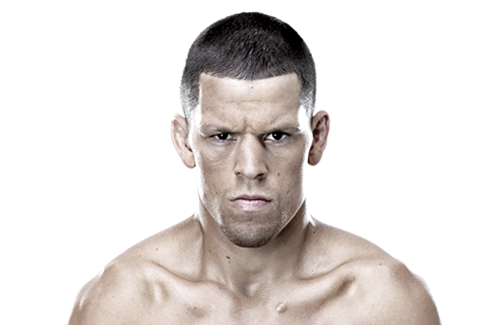 Nate Diaz has not fought since a second-round knockout win over Gray Maynard at The Ultimate Fighter 18 Finale a year ago. Since then, “The Ultimate Fighter 5″ winner has tried to negotiate for better compensation and a new contract. When he didn’t get that, he decided to take a break from competition.

“I went to sign this contract to fight for the title against Henderson, and when I went to sign my contract, they were locking me down for eight fights for sh-tty pay,” Diaz said in an interview on the Chael Sonnen podcast. “I was like, ‘This is a world title fight, and you’re going to pay me this chump change?’… I’m like, ‘OK, this is ridiculous, still, because this is a world title fight in the Ultimate Fighting Championship. That means I’m fighting to be the No. 1 fighter in the world at 155 pounds.’ I think it’s ridiculous because the No. 1 in any sport is probably a millionaire – in golf, in tennis and in soccer.

“Hector Lombard and Eddie Alvarez were with Bellator at the time and were offered hella money to come over. Eddie Alvarez, I know who he is, but nobody else does, and he was going to get paid like 20 times more money than I was going to get to fight for a world title. So I was going to sign to fight for a world title for not even a tenth of what this guy was getting? I don’t think I could sign that contract, so I went in there, and they said, ‘We’re not paying him that much. That’s rumored.’ And I was like, ‘I know you’re paying him this much, and you can’t even double or triple or just change things a little bit to make me happy? What if I became the champion?’ They’re like, ‘Get the championship, and you’ll get this and you’ll get that.’”

Diaz was not happy with the contract, but with only a few weeks remaining until the title fight, he said he agreed to sign the deal on the premise he could renegotiate in the near future.

“I was real negative about the situation, and it was two weeks out from the fight, and … (White) was like, ‘Look dude. Whenever you’re not happy with your contract, whenever you’re not happy, just let me know, and we’ll renegotiate,’” Diaz said. “I was just so focused on fighting, I was going to fight and they knew I was going to fight. I signed the contract. But he sold me over with that, ‘Anytime you’re unhappy, let’s renegotiate. We will renegotiate.’”

Diaz then went on to lose his next two fights to Henderson and then Josh Thomson knocked him out for the first time in his career, arguably putting his value at an all-time low.

“I signed it, very unhappily, and I went into the fight and I lost, so what am I going to do? Go cry over spilled milk?’ Diaz said. “I wasn’t going to go cry for more money now that I just lost. I understood that. I was thinking I should have won and got a new contract, but what’s done is done.”

Diaz then beat Gray Maynard via first-round knockout. He was back to winning ways, so when UFC officials approached him about replacing teammate Gilbert Melendez in a fight against undefeated contender Khabib Nurmagomedov, Diaz felt he finally had the leverage to again push for a new contract.

“(Nurmagomedov) was supposed to fight Gilbert at the time, and then when things weren’t working out with their whole contract situation, they asked me if I would fight Khabib,” Diaz said. “I just beat Gray Maynard. Then when they asked me (to fight Khabib), I thought, ‘Now’s a good time to come back to the old thing they said.’ So I said, ‘Hey, I’ll fight Khabib, but is it possible for me to renegotiate my contract?’”

The request failed so Diaz wanted to leave and requested his release from the UFC but it was refused ands he has not fought since.

“I felt like it was a favor. ‘This didn’t work out with this, so yeah, I’ll fight the guy. Can I renegotiate since you told me I could already do that?’ You know what else? They could have simply said, ‘No.’ And I would have said, ‘Ah, f-ck it.’ Then I would have gone and fought the motherf-cker. They could have said, ‘No,’ but instead, I read it all over the Internet, and I feel like it was kind of a coverup. No one paid attention to anything. I was trying to let it be known what happened with that. I got the sh-t end of the deal on that one.”

Despite all of that Diaz is set to fight Rafael Dos Anjos at UFC on FOX 13.

“I feel like I’ve been taken advantage of for a lot of years with the whole situation,” Diaz said. “More so because I kind of grew up in this, and I didn’t understand or know what was what with money and contracts, and what was happening, until one morning I woke and for some reason I was like, ‘Hold up. I’ve been really underappreciated, underpaid, under-all-kinds-of-sh-t.’

“I wanted to try to get my situation fixed. I was trying to get a fight going on, but at the same time I didn’t want – it was a whole mess going on. But everything got cleared, up and I’m ready to get back to work and do my thing.”