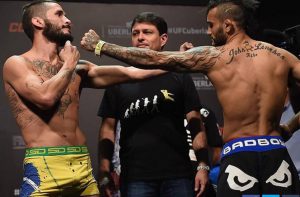 The highly anticipated Flyweight contender match-up between John Lineker (24-7 MMA, 5-2 UFC) is set to meet Ian McCall (13-4-1 MMA, 2-2-1 UFC) is back on and is set now for UFC 183 in January. The two were originally set to face off at UFC Fight Night 56 event but was canceled after Lineker was forced out with an illness.

Ian McCall (13-4-1 MMA, 2-2-1 UFC) got back on track after losing 2 fights to the Champion Demetrious Johnson and Joseph Benavidez. McCall has since pulled off back to back wins over Iliarde Santos and Brad Pickett.

John Lineker (24-7 MMA, 5-2 UFC) has won five of his last six fights, with his latest fight of the night win over Alptekin Ozkilic back in July UFC Fight Night 45.

COREY ANDERSON GETS A NEW CHALLENGER FOR UFC 181