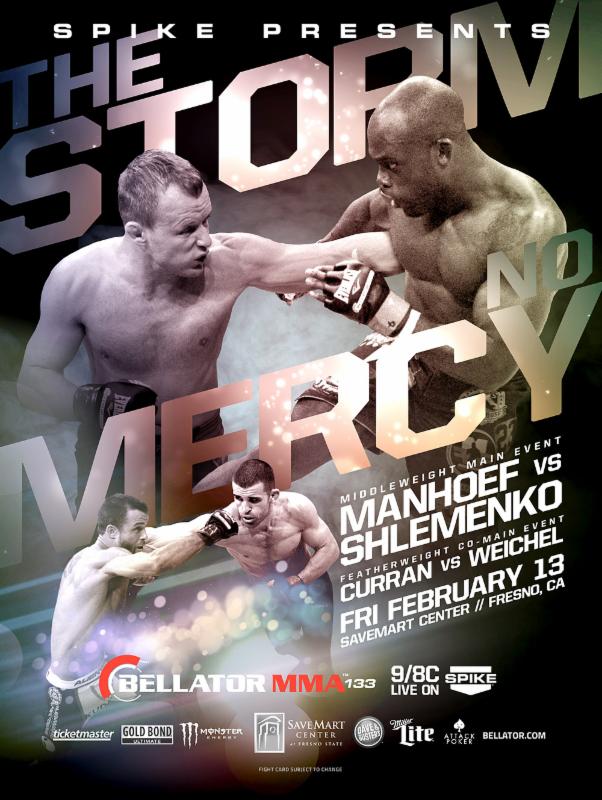 Tickets for “Bellator: Manhoef vs. Shlemenko” are currently on sale and can be purchased at The Save Mart Center box office, Ticketmaster.com or Bellator.com.

The evening’s main card, including Curran vs. Weichel and Budd vs. Nogueira, airs on Spike TV.

“I get more and more excited every time I discuss this card,” said Bellator MMA President Scott Coker. “With Curran and Weichel, you know you’re going to get a championship-caliber fight, and I’m looking forward to seeing another former Strikeforce fighter in Julia Budd test herself against a very dangerous Talita Nogueira.”

The 27-year-old Curran is a 13-time Bellator MMA veteran and two-time Bellator MMA Featherweight World Champion. In March, Curran scored a submission win over then-champion Daniel Straus to claim the belt before losing it in September to Patricio Freire by decision following a five-round battle. Now he looks to get back on track for another shot at the belt.

Curran now meets Germany’s Weichel, who at just 30 years old already boasts more than 40 professional bouts. Earlier this year, Weichel earned a Bellator MMA tournament win by racking up victories over Desmond Green, Matt Bessette and Scott Cleve, bringing his record to 11-1 in his past 12 outings. With 34 career wins to his name, an incredible 21 of his victories have come by submission.

A Muay Thai specialist, Canada’s Budd opened her MMA career by competing four times under the Strikeforce banner. She then transitioned to the all-women’s Invicta FC promotion, where she racked up a four-fight winning streak that includes two victories by TKO and another by submission.

Meanwhile, Nogueira’s strengths lie in grappling, as she boasts not only a Brazilian jiu-jitsu black belt but also a pair of grappling world titles. She turned to MMA in 2009 and is undefeated through her first six professional contests, including four wins by submission.

More bouts for “Bellator: Manhoef vs. Shlemenko” are expected to be announced shortly.