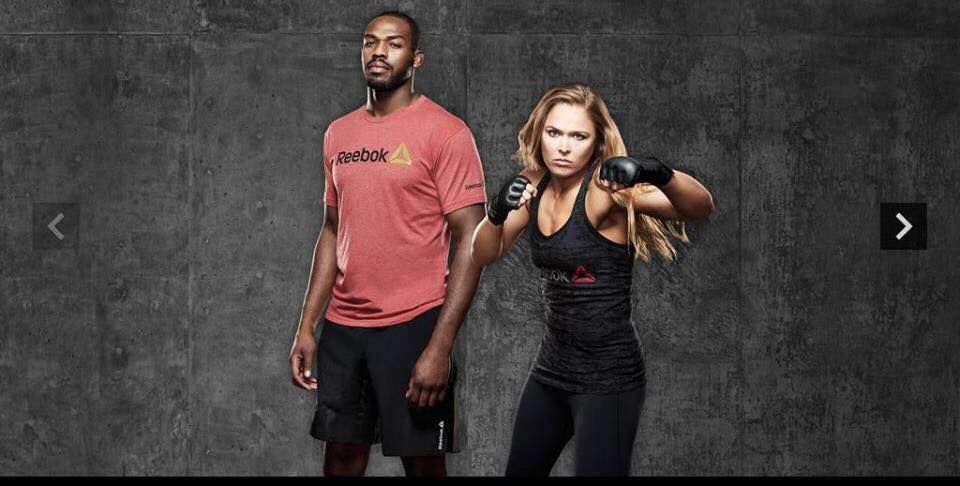 Jones, the UFC Light Heavyweight Champion, and Rousey, the UFC Women’s Bantamweight Champion will be working closely with Reebok to help develop and launch the brand’s new range of UFC apparel, as well as a new collection of footwear and apparel specifically created for the more than 35 million people around the world who participate in combat training to stay fit.

“Not only are Ronda and Jon admired by millions of UFC fans, but they also are among the fittest, most disciplined athletes in the world, and an inspiration to the millions of people around the globe who train like fighters,” said Matt O’Toole, President, Reebok. “We’re looking forward to working with each of them and tapping into their insight and expertise to create world-class training products and fight gear.”

On December 2, it was announced that, starting in 2015, Reebok will be the exclusive authentic global outfitter of UFC. As part of the long-term partnership with UFC, Reebok is creating, for the first time ever, UFC ‘Fight Week gear’ and ‘Fight Night Kits’ for all UFC athletes, as well as an apparel collection for millions of UFC fans around the world.

Ronda Rousey
An Olympic medalist and Judo World Champion, Rousey is undefeated in 10 MMA fights and was the first female athlete to sign with UFC. A global phenomenon, Ronda has helped to shift perceptions around the world of what it means for women to compete in combat sports. Her next bout will be against Cat Zingano at UFC 184 on February 28, 2015.

“From the very beginning, it was clear to me that Reebok is passionately invested in our sport and its athletes. The team is committed to helping push our sport forward and I am proud to be part of it. Reebok understands what tough fitness means for women and what women need for their fitness lifestyle. Together we’re going to inspire even more people to train like fighters,” said Rousey.

Jon Jones
Crowned the youngest world champion in UFC history, Jones has one of the greatest records in the Octagon®. Currently ranked #1 in official UFC pound-for-pound rankings, Jones will take on Daniel Cormier at UFC 182 in Las Vegas on January 3, 2015.

“Reebok is working with UFC to take the sport to the next level. It’s going to be an amazing journey and I’m incredibly proud to be a part of it. The brand has a great history in fitness and training, and that comes through in everything they do. What I’m particularly excited about is that the input of the fighters is going to drive the product innovation, which will ensure all athletes, whether they are fighting for a world championship or just to be fit, will have the very best gear,” said Jones.

“In addition to being one of the fastest growing sports in the world, MMA is also one of the most demanding in terms of training and conditioning,” said O’Toole. “The mental and physical toughness and discipline required is remarkable. There are no better examples of this than Ronda and Jon, and they have the championships to prove it.”

Image provided by Reebok and UFC