HERMAN VS. BRUNSON RE-BOOKED FOR UFC 183

by Michelle Luce
in UFC
28 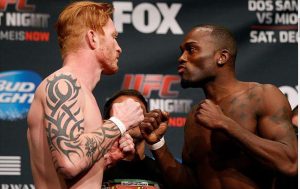 After suffering food poisoning on the night that he was due to face Ed Herman at UFC Fight Night On Fox 13 last Saturday night, the middleweight contest between Dereck Brunson and Ed Herman has been re-booked to take place at UFC 183 which takes place on January 31st, 2015, from the MGM Grand Garden Arena in Las Vegas, Nevada, according to Sherdog

Both fighters will enter the contest on the back of recent wins, as Dereck Brunson got the better of Lorenz Larkin, while Ed Herman gained a victory over the Brazilian Rafael Natal on his last foray into the Octagon.

The two have had a recent war of words on twitter following the cancellation of their scheduled fight which you can read here courtesy of MMAJunkie.

The card is headlined by the intriguing middleweight encounter between former UFC middleweight champion Anderson Silva, and the always-entertaining Nick Diaz.

The rest of the fight card for UFC 183 looks like this….