by Michelle Luce
in UFC
31 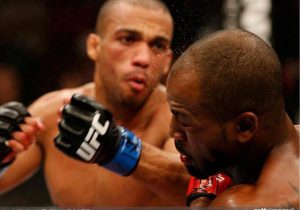 The UFC makes its return to Brazil on February 22, 2015 for the Fight Night event headlined by Rashad Evans vs. Glover Texeira at Gianasio Gigantinho arena in Porto Alegre. The event featuring two of the top light heavyweights has added more bouts to its fold.

Added to this already interesting card in the lightweight division is a battle between Edson Barboza and Michael Johnson.

Edson Barboza has looked very impressive lately with a TKO win over Evan Dunham in July, and an impressive decision win over Bobby Green in November.  Edson is currently 9-2 in the UFC (15-2 overall).

Michael Johnson has been riding a 3 fight win streak, with victories over Joe Lauzon, Gleison Tibau and Melvin Guillard. Johnson was expected to face Josh Thompson in July of this year but was forced to withdraw due to injury. The 28 year old Johnson is currently 8-3 in the UFC (15-8 overall).