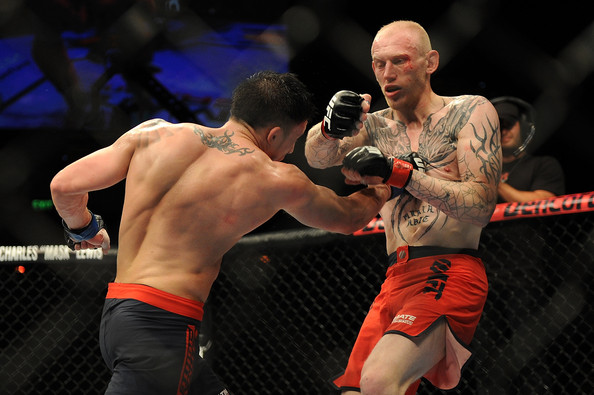 Norman Parke aims to make further headway up the lightweight rankings when he meets Gleison Tibau in Boston later tonight.

The 28-year-old has a record of 21 wins from 24 contests and claims the sport gave him the discipline sadly lacking in his life.

“I went through a hard time when I was younger,” he said.

“I was a bit destructive. But MMA was the first thing that taught me how to respect people.

“From the moment I became involved in the sport, my life was set because this was the route I knew I had to go down.

“It led me on the right direction and, as time went on, I took full advantage of the opportunity that it presented me and I have never looked back.”

Now he is aiming to make further inroads into the title picture with a win over 31-year-old American-based Brazilian Tibau.

He said: “This is a fight where I need to step up to the plate and show people that I am one of the new breed to the top 15 in the world.

“I’m determined to put on a good show and make sure I beat him convincingly. Everyone knows me now and I think I am in the mix.”

The Parke v Gleison fight is the main support to the headline meeting of featherweights Conor McGregor and Dennis Siver.

Dubliner McGregor says that the German-based Russian won’t last beyond the first round.

A win will secure him a tilt against champion Jose Aldo.

And McGregor, who has won all of his four UFC contests, said: “I want that title chance and I will stop Dennis inside two minutes.

“I’ve gone through a number of possible scenarios and I just cannot see him escaping the first two minutes against someone like me.”

McGregor and Parke fight live on BT Sport 1 at 3am  Monday.