Donald Cerrone Looking For A Break Then ‘Hopefully’ Khabib Nurmagomedov 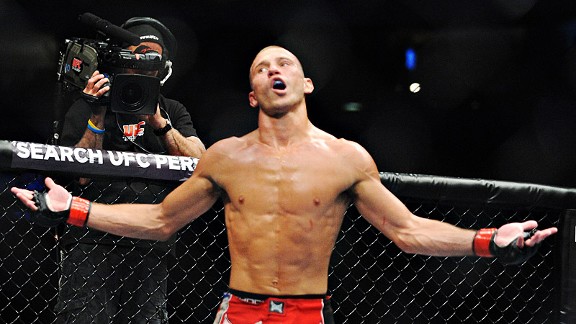 Many things have been said about Cerrone over the years. Some have said he’d never be a contender, others called him stupid for partaking in ‘reckless’ activities outside of MMA such as wake boarding and others have called him one of the most exciting fighters in the lightweight division today.

One things nobody could call ‘Cowboy’ is lazy.

Donald Cerrone (27-6-1) won his seventh fight in 14 months on Sunday night at UFC Fight Night 59, albeit in controversial fashion, edging a decision over former champion Benson Henderson , a man Cerrone had fought twice previous and lost both. But not only did Cerrone win this fight, he won it after taking the fight on just two weeks notice. TWO WEEKS!!!! That is insane but it’s that ‘anytime, anywhere, anyplace’ attitude that has made Cerrone a fan favourite in the past year.

The win extended his remarkable hot streak to seven wins in a row and has many calling out for Cerrone to get his chance at gold. Though that dream may not too too far off, for now Cerrone knows he probably has to win 1 more top fight but this probably won’t be a short notice fight last this past weekend. But he does know who he wants to fight.

“Talking with Dana (White) and Lorenzo (Fertitta), I think Khabib is going to be what’s next, for sure,” Cerrone said at UFC Fight Night 59’s post-fight press conference. “I’m going to take some time off and just get ready and stay ready, and hopefully Khabib will be ready.”

Leave it to ‘Cowboy’ to call out the guy nobody else wants to fight. Khabib Nurmagomedov, the undefeated Russian has looked incredibly impressive since entering the Octagon, going 6-0 in the process as well as being ranked number 2 in the lightweight rankings before an ACL injury kept him sidelined since April 2014.

Khabib is due back some time in the spring and it seems Cerrone is quite content to take a well-earned breaking and wait until he gets the call.

“Seven in a row, man. I feel good. It’s time to take some time off,” Cerrone said. “Talk with Dana and Lorenzo after this, go see the Super Bowl and go to Daytona 500 and just kind of hang out.”

“Whatever’s next I’m willing to take it and fight.”

However, knowing Cerrone, he could have extended his streak a few times before that chance arrises