Andy Ogle Fighting For His Future 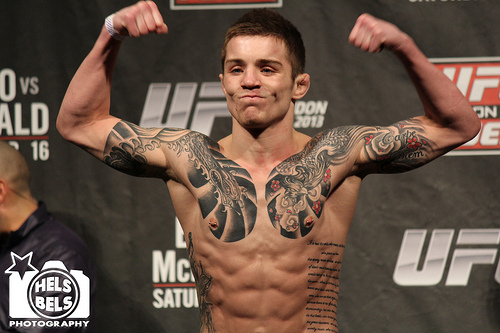 Andy Ogle is an English mixed martial artist currently signed with the Ultimate Fighting Championship in their Featherweight division. A professional MMA competitor since 2009, Ogle has made a name for himself fighting for numerous promotions all over England. He was a competitor on FX’s The Ultimate Fighter: Live.

This weekend Ogle fights Makwan Amirkhani at UFC on Fox in Sweden.
Ogle has been a tough fighter to predict since coming to the UFC, but following three losses in a row he’s likely in desperation mode to get a win this weekend.  Ogle is a tough customer when it comes to striking in the pocket and looking for the knockout, but he’s left himself open to counter attacks, which has resulted in his demise in several bouts. To me this is a must win for Ogle if he wants to remain in the UFC.

His opponent Amirkhani is a solid prospect out of Finland with a history in wrestling, primarily Greco-Roman, which means he likes to work from the clinch and the body lock and that could bring him a lot of success in this fight if he can work Ogle against the cage and trip him up to take this one to the ground.  Amirkhani is still a work in progress when it comes to his striking, so chances are he will have to stick to his bread and butter to get the job done against Ogle.  If he can’t get the takedown or somehow loses himself and decides to stand and bang with Ogle, this could be a bad debut for the Finnish fighter.

After picking up his first UFC victory on home soil in February 2013, Ogle has come out on the wrong end of the result in three straight fights, putting him on the hot seat heading into his return to action this weekend.An optimist may say that the fact that he’s managed to remain on the roster despite a trio of defeats shows that the company sees something they like in him, but Ogle would rather just focus on the future and turning things around Saturday night in Stockholm

“That’s a nice way to look at it,” Ogle laughs when presented with a positive spin on his current predicament. “The way I see it is that I beat Akira Corassani and I’m 2-3. Yes, I have lost them three and yes, they’ve been close fights, very entertaining fights and I assume that’s what kept me along, but I don’t feel as though Lady Luck has been on my side. “Anyone can go in there with skill, but certain times, it’s just not your night and to be quite frank, it hasn’t been my night in a while – quite a while. But that’s in the past and all I’m thinking about is the future and beating this guy.”

“Even though I’m not happy with them fights and I want to do better and show the UFC that I’m capable of doing great things, I’m not going to shun what I’ve done in the past because it’s all a learning curve.

“The negatives pave the way to the future and you do learn more from your losses than you do your wins, and I’ve learned a lot. I’ve been in there with the best, I’ve been going hard and I’m still here to tell my story. I’m still developing and I’ve still got a smile on my face.

“Now I’m going to show everyone what all these lessons taught me.”

One thing we know is that we will never doubt his heart and his warrior spirit and one thing for sure is that Ogle will go out there and put on a show and everyone at MMA UK will be rooting for you.