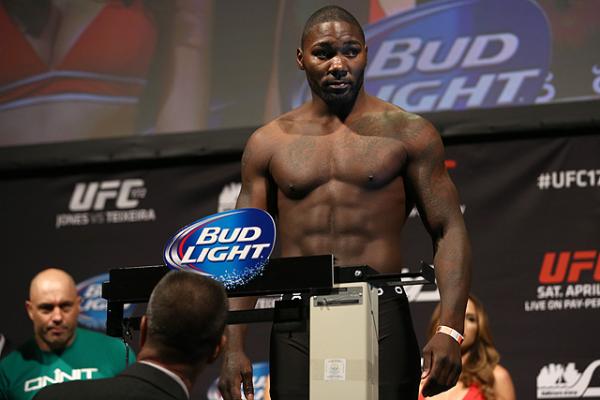 At UFC 165 light heavyweight champion Jon Jones needed all five rounds to defeat Alexander Gustafsson in a controversial decision in their instant classic.

In doing so he also he also cemented his status as a true challenger to the reigning 205-pound king and Johnson believe he’ll bring a different level of knockout power that “Bones” has yet to encounter in a fight.

“I think I’ll be the hardest puncher he’s ever faced, and he’s faced a lot of top-quality guys,” Johnson said at the post-fight press conference. “Hopefully I can just do things that nobody else has done to him. Alex gave him the worst beating he’s ever had. Hopefully I can give him one 10 times worse.”

While Johnson says he was confident that he could finish Gustafsson inside of a round, he was concerned about allowing ‘The Mauler’ to find his rhythm.

“My game plan was just to pressure and make him fight my kind of fight,” Johnson said. “I couldn’t let him get comfortable because once he starts doing his Ali shuffle, you know it’s about to be a long night for you.”

While most fighters would be elated to have just earned themselves a title shot, Johnsons post fight emotion was a state of disbelief. He added that he felt bad for Gustafsson, understanding what it’s like to feel the gut-wrenching pain of disappointment.

“It just didn’t seem real. I was like, ‘I can’t believe I just beat the guy who, in my opinion, beat Jon Jones.’ I was just in a state of shock. Nobody’s ever stopped Alexander before. I was just speechless,” he said.

“I felt really bad; I saw him crying,” Johnson continued. “I know how it is. You have a goal and something gets in the way. I felt this pain before. I guess I’m human. I just felt bad for — I can’t say ending his goal — but he didn’t reach his goal.”

It’s an amazing turn around for ‘Rumble‘ who was fighting in WSOF back when Jon Jones and Alexander Gustafsson were going to war. He has left his reputation behind for bring an immature fighter who couldn’t make weight and has firmly stated his intentions, going 3-0 since coming back to the UFC with wins over Phil Davis and Antônio Rogério Nogueira coming before his recent victory over the Swede.

Can ‘Rumble‘ beat Jones? I don’t know, but I can’t wait to find out.