UFC putting all its eggs in one basket 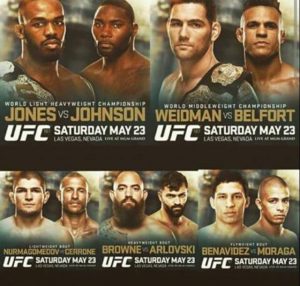 What do you do if you’re the Ultimate Fighting Championship and you’ve been having trouble with cards falling apart due to lack of depth in star power?  You put half of your marketable roster one on card together; this way, no amount of injuries, failed PED tests, or Ghosts of Affliction pasts can leave your fight card more depleted than the uranium shells Bruce Willis used in “The Jackal.”

The proposed lineup for UFC 187 brings me back to a much simpler time for Mixed Martial Arts.  When nearly every Pay Per View main card was stacked from top to bottom with recognizable names and appealing matchups between champions and top contenders.  Make no mistake, when May 23rd comes around, the city of Las Vegas, Nevada will host a throwback night of MMA for fans around the world.  Like a crappy 90’s song from “The Urge”, lets jump right in!

Did I call this card a throw back?  Of course I did, because anchoring this event is a show down in the UFC’s premiere Light Heavyweight Division.  Anthony Johnson has been on a Bill Goldberg-esque streak of destruction since his return to the UFC, claiming the souls of three top contenders in the UFC along the way, most recently defeating #1 ranked Anthony Gustaffson via prison-punking in front of the Swede’s own countrymen. Rumble brings with him the type of power and overall striking that doesn’t make you sneer when Joe Rogan says, “With his power, he can knock out anyone in the division!”

Standing in Johnson’s way however is the champion, Jon Jones, who in between bumping lines of blow like he trains out of Studio 54, is generally considered to be the greatest mixed martial artist alive, and possibly ever.  The scariest thing about Jon Jones is that according to many who surround him, he is just now starting to take training seriously and making it a full time commitment in his life.  If you’re aware of Jones’ resume in the sport, his self proclaimed part(y?)-time approach to training is nothing short of unbelievable.  When these two lock horns, expect fireworks in every direction.

Vitor Belfort’s career in Mixed Martial Arts started in late 1996, months later making his debut in the Octagon at UFC 12, defeating two opponents en route to winning the UFC Heavyweight Tournament.  His career has been a series of ups and downs that are incomparable to any other fighter in the sport.  From the highs of becoming UFC Heavyweight Champion, to the lows of PED related suspensions, Belfort has seen and done it all.  Well, almost done it all.  The former champion has yet to hold a title in the UFC’s middleweight division, and after a career resurgence of TRT related highlights that seem more at home in a deleted scene from “The Avengers”, Belfort finally will get his chance at the middleweight title.

While Belfort was first starting to fight professionally, his next opponent was probably knee deep in the D.A.R.E. program while in the fifth grade.  To put it in brutally simple term, UFC Middleweight champion Chris Weidman is really good at fighting.  The former standout college wrestler has transitioned flawlessly to the world of mixed martial arts, ascending the ladder all the way up to the status of undefeated world champion.  Knocking out Anderson Silva is impressive enough for most fighters, but beating Silva twice, and then out striking Lyoto Machida en route to an impressive 5 Round decision is even better.  When you add to it that Chris Weidman is seemingly ever improving, the Serra/Longo standout looks poised for a long run at the top of the division.

This fight is the culmination of a saga that includes questionable drug tests, to even more questionable regulated Testosterone Replacement Therapy, to training injuries to seemingly every pothole along the way, but it’s finally here.  Vitor Belfort will challenge Chris Weidman for the UFC Middleweight Championship, and it will be well worth the wait.

What can I say about this fight other than when each of these guys win, Brendan Schaub’s “Fighter and The Kid” podcast gets better. This battle of Top 10 heavyweights could very easily decide the next challenger to the title, either interim or recognized.

Andrei “The Pitbull” Arlovski is on a bit of a career resurgence, going 2-0 since his return to the Octagon this past June, and (realistically) 9-1 dating back to 2011.  Currently ranked #7, a win over Travis Browne could mean big things for the former UFC Heavyweight champion, and with his previous win over Interim-Champion Fabricio Werdum, he may be able to position himself for a shot at the interim title should Cain Velasquez remain on the sidelines due to injury.

Standing in Arlovski’s way is none other than the #3 ranked heavyweight, Travis “Hapa” Browne.  After losing his bid at a title eliminator match against current Interim-Champion, Werdum, Browne rebounded in a big way with a savage first round mauling of perpetual self-hype machine, Brendan Schaub.  A win over a big name contender in Arlovski, should be more than enough to give Travis Browne a crack at the top of the division again, and the fans should be thankful for it.

These fighters always deliver and this fight is not just a meaningful fight in the division, it’s a gift to any fan that gets to watch it.  A matchup between the old guard and new blood is becoming rarer and rarer in this sport, but this one should be a competitive affair with serious title implications.

Credit Donald Cerrone for always being down for a scrap, but this fight is a tough sell if I am “Cowboy.”  Since losing to Rafael Dos Anjos in August of 2013, Cerrone has taken time enough away from bull riding and wake boarding to win seven straight in the UFC’s most talent-rich division.  With those seven wins, most recently a closely contested unanimous decision victory over former champion Benson Henderson, Cerrone has all but been assured of a title shot, but has opted to stay busy and take on the Russian super-grappler, Khabib Nurmagomedov.  I don’t understand taking this fight if you don’t have to, as wrestling has always been the weakest part of Cowboy’s game.  It would be terrible for Cerrone and the fans alike if he is outwrestled for three rounds by Khabib and loses his shot at the title.

On the other hand, Khabib “The Eagle” Nurmagomedov is in a similar boat as Cowboy Cerrone.  Khabib’s win streak spans his entire professional career, going 22-0 overall with six of those wins coming in the UFC. These two were set to lock horns once before, but a knee injury suffered by Nurmagomedov forced the bout to be scrapped until now.

The difference is that in the time Khabib has been injured, Cowboy has been active.  Credit both of these fighters for stepping up to face such elite competition while on the cusp of a title shot.  The winner of this fight will undeniably be the #1 contender for Anthony Pettis’ title.  155 = Shark Tank.

Rounding out this amazing card is a battle in the flyweight division between two, top five contenders is John Moraga and Joseph Benavidez. This fight is a surefire title eliminator in the current 125-pound weight class, and each fighter has a chance to put a stamp on it with an impressive performance.

John Moraga, the current #5 ranked Flyweight in the UFC is riding a two-fight win streak after a loss to current #1 contender, John Dodson.  Five fights removed from his loss to division champion, Demetrious Johnson, I think enough time has passed for Moraga to justify his second crack at the title in the minds of most fans.

Standing in Moraga’s way is none other than Joe B-Wan Kenobi, Joseph Benavidez.  The current #3 ranked Flyweight is just two fights removed from a losing bid to “Mighty Mouse” Johnson, but a submission victory over Tim Elliot, as well as an impressive decision over Dustin Ortiz has put the Joe-Jitus practitioner in a prime spot for another shot at the title.

Both of these fighters chances for a second crack at the title would be made easier if Champion, Johnson loses his upcoming bid against Kyoji Horiguchi this April, at UFC186.