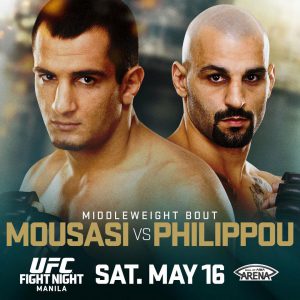 The UFC Fight Night: Edgar vs Faber card is starting round itself out, as two more bouts have been added to the card.   Middleweights Gegard “Picture Perfect Posture” Mousasi and Costa “Uriah Hall’s Best Friend” Philippou are set to tangle in what should serve as the co-main event of the evening.  This fight is a solid addition to a card that desperately needed name value in the supporting role and the fans now have a fight that can help clear up some of the log jam that is accumulating in the top ten of the UFC’s middleweight division.

Mousasi is looking to capitalize off of his win(read: execution) of the ghost of Dan Henderson’s present in Stockholm, Sweden in January.

Costa Phillippou is looking to make it two in a row after dropping consecutive bouts to Francis Carmont and Luke Rockhold.  The Cypriot Slugger is looking to charge his way back into the top ten of the Welterweight division, and a win over the number seven ranked, Mousasi could just about do the trick.

But that’s not all.

Also added to the card is a fight in the welterweight division between the streaking Neil Magney and the always entertaining, Hyun Gyu Lim.  For Magney, a big statement could be made in this fight; a win would be his seventh straight inside the octagon dating back to February of 2014.  It would be hard to deny a fighter with that streak a spot in the coveted Reebok era rankings system.   For now, the sky seems to be the limit for Magney, who has put himself in a favorable position for a shot at fighters that are higher up the ladder.

For Lim, he looks to make it two in a row since his loss to former Strikeforce Champion, Tarec Saffiedine back in January of 2014.  Perhaps with a win, Lim could start his own Magney-esque run in the 170-pound division.