by Peter Knox
in MMA News
7 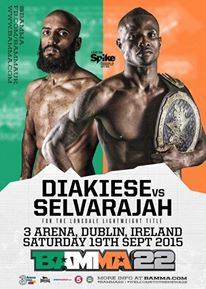 BAMMA, leaders in MMA sports entertainment and the home of European MMA, is proud to announce that another title fight has been added to the BAMMA 22: DuQuesnoy Vs. Loughnane lineup for the 3 Arena, Dublin. The Lonsdale Lightweight title is on the line as Champion Marc ‘Bonecrusher’ Diakiese takes on the number one challenger to the belt, Rick Selvarajah. Marc ‘Bonecrusher’ Diakiese (7-0), has made huge waves since joining the BAMMA Lightweight division. Most recently taking a hard fought unanimous decision over Jack ‘The Pilgrim’ McGann to gain the Lonsdale Title. Considered as one of the UK’s fastest rising stars, he aims to meet the challenge of Selvarajah head on as once again he takes on a fighter with an undefeated record. “Last time out against Jack McGann I implemented the perfect game plan to take his zero, now Rick Selvarajah is the next to step up to the plate. Rightly he’s the number 1 contender and also shares the same record as me at 7-0, but I have fought tougher opposition. We both beat Jefferson George, however, I did it in a far more convincing fashion. Come fight night I don’t think he can present me any problems that I can’t handle. And to be on this historic event in Ireland, I can’t wait to show the Dublin crowd my particular brand of bonecrushing!” Rick Selvarajah (7-0) made an immediate impact on his debut at BAMMA 20 taking a decision win against Jefferson George. The Premier MMA fighter from Harrow has steadily risen through the ranks of the UK MMA Lightweight scene and now gets his biggest opportunity in Dublin with the first crack at Marc Diakiese’s title. Once again undefeated records are on the line. Both fighters are confident of coming out on top. “Whoever wins this bout is going to rule the BAMMA Lightweight Division for years to come. Dublin fans are in for all out war between two of Europe’s top Lightweight prospects” – BAMMA Matchmaker Jude Samuel.