How To Become A Star In The UFC 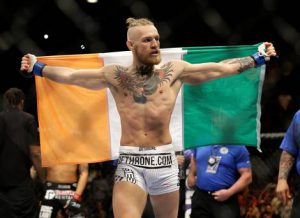 It’s a strange alchemy that’s needed to create an MMA star, and it’s one the UFC was struggling with. The first generation of MMA Superstars were fading away and the new breed didn’t seem to be capturing the imagination. At least until an Irishman strode into the octagon and started setting records. Even without Jose Aldo, UFC 189 will be the biggest Featherweight fight in history. In only 5 fights Conor McGregor might already be the sport’s biggest star. So if you are looking at the MacMansion and the crocodile skin shoes thinking, I’d like a piece of that – these are the five things you need to do.

This is not pro wrestling. Sure, MMA fans like beefs, big personalities and storylines. But if you can’t back it up in the cage, you should go hang out with Kimbo in Bellator. The hard truth is, if you never fight for a belt, you’ll never be a star. But Contendership is the bare minimum. If you can be the best fighter we’ve ever seen then that will really help. And finish fights. Part of the excitement of MMA is not knowing when the fight will end. If casual fans wanted to hear the opinions of judges they’d be watching Strictly Come Dancing. Spare us that, and do it in devastating fashion. Sorry Cathal Pendred, you seem like a good dude, but a run of dubious split decision wins isn’t going to make you into a star.

First impressions count, so when you arrive in the UFC you better be ready to make your run at the title. If you can’t look spectacular against the mid tier guys, no one will care to see you against the top ten.  People want to get on board a train that appears to be headed for an exciting destination. We will even forgive you if the destination turns out to be a run of relatively dull unanimous decisions (see George St Pierre). On top of dominant performances McGregor’s speedy rise can be partly attributed to the fact that he has never pulled out of a scheduled UFC fight. The hype around many fighters has dissipated after bout cancellations and long layoffs. Part of the fun of being a fight fan is the build up, but a build up with no fight is like having someone stick a finger in your mouth when you’re about to sneeze. People who do that are worse than Jimmy Saville making dreams come true.

Not everyone can be Conor. He is one of the greatest talkers in combat sports history, but part of that comes from the fact that he recognised media work was a skill to master. Watch any embedded, you will see him being unfailingly nice and courteous to the media. Being nice is helpful, but you also have to say something broadcast worthy. Fighters who come out and say ‘I’ll-fight-whoever-the-UFC-wants-me-to-fight’, sound like they are trying to brown nose their boss and nobody likes a brown nose.  The irony for these guys is, neither does the UFC. If you say you will fight whoever the UFC gives you, it will be someone you’ve never heard of and it will be on fight pass. Be cocky, be angry , you can even be really weird. But above all else don’t be a boring fuck. Also, speak English, you don’t even have to be good at it, it just helps to engage the English speaking fans who are the majority. Look at how well it worked out for Yoel Romero who has just picked up a lucrative sponsorship from the Westboro Baptist Church.

One on one, we can all get tricked, but a crowd can sniff out a fake quicker than a police dog can sniff that wrap of coke you forgot was in your wallet. Jon Jones is a dick. This is fine from a star building perspective (it’s less ok if you’re a pregnant lady driving a car across a junction).  If he had spent less time telling us how he believes in God and more time telling us he believes he’s God’s gift he would be the most hated man in America. It’s clear you don’t have to be a good guy to be a star. If wife beating enthusiast Floyd Mayweather has taught us anything, it’s that. You don’t really have to be anything specific. GSP, Brock Lesnar and Chael Sonnen have a profession in common and not much else. We just need to believe you and find you interesting.

No one does anything alone, and you need Dana White to look at you and see dollar signs. But if you have successfully completed steps 1-4 then he will. Even if you do all five, you still won’t be Conor McGregor, but you’ll be well on your way.