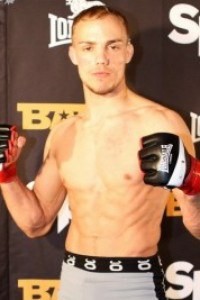 A disciple is someone who gains  his knowledge from his fellow teammates and coaches so that he may grow and flourish under their teaching. In today’s episode of Across The Pond, you will meet a talented fighter who is doing just that. Although he has not yet reached his full potential  he is thriving and flourishing every day.   Fighting out of Fight Ministry, Jack Grant has five Submissions, five Knockouts, and two decisions so far in his 11 fight career. Grant made his Professional debut in September 2012, tapping Andy Cona due to punches in round one. He would go on to win his first six fights before signing with BAMMA in April 2014. Grant is very crafty on the ground and has a habit of finishing fighters quickly. He  faced Jefferson George at BAMMA 15 in his promotional debut, losing via Split decision.  After a one fight absence, he returned to BAMMA to face Alexi Roberts at BAMMA 16, losing via Unanimous Decision. Grant’s most brutal performance to date is when he flattened Warren Kee with a right hand at BAMMA 20. He will now face Jack Magann in a Lightweight tilt in Dublin on September 19th at BAMMA 22. Enjoy the fights and MMA UK’s sponsored podcast feat Bryan Lacey.

3. A Calf Slicer is very rare these days in MMA-