Student Of The Game

by Myles Painter
in Across The Pond
21

Student of The Game 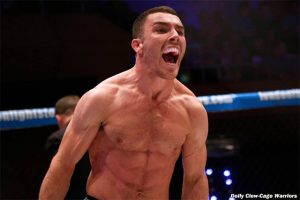 The Cage Warriors Bantamweight division is laden with talent. Cory Tait, James Brum, and Jordan ”Hansome”Desburough are just a few of the talents that the 135 pound division has to pick from. In today’s episode of Across The Pond, we will examine a fighter who gets lost in the shuffle .

Fighting out of Next Generation UK  with the likes of Chris Fishgold and Danny Roberts. 26-year-old Dean Garnett  is unbeaten so far in his young career, earning five first round Submission wins in seven career fights so far. Garnett made his Mma debut in December 2010, defeating Nathan Thompson via Armbar in round one. Garnett would pick up two more Submission wins and two decisions before signing with Cage Warriors in May of 2014. he faced John Cullen  at Cage Warriors 68 in Liverpool and beat the Scot via Heel hook late in round one. In his most recent outing at Cage Warriors 70 in Dublin, Ireland in August 2014, Garnett faced Martin Sheridan  and won via Inverted Heel Hook in round one.