When a fighter becomes champion, a row of challengers line up to face him. In tod 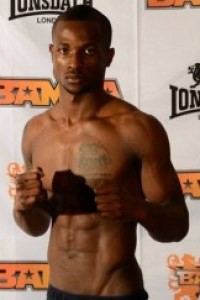 ay’s episode of Across The Pond, we will meet a fighter who is about to make his first title defense for one of the top promotions in Europe. A professional since September 2013 and training out of Atherton Submission Wrestling  with BAMMA fighters Lee Chadwick and Andy De Vent, 22 year old Marc Diakiese is undefeated so far in his career holding four Decisions, two Knockouts, and one Submission.  ”Bonecrusher” is a fighter who can break a fighter down and is not afraid to dictate where the fight goes. He defeated his first two opponents, Harris Neofytou and Tom Earnshaw via Knockout in round one. Marc would go on to win his next two fights before signing with BAMMA in September 2014. At BAMMA 16, ”Bonecrusher” faced Jefferson George and defeated him via Unanimous Decision. He next faced Vernon O’ Neil at BAMMA 17 and again won via Unanimous Decision. Marc is currently the BAMMA Lightweight champion, besting fellow young gun Jack Magann in the co main event of BAMMA 19 to obtain it. ”Bonecrusher” will make his first official title defense against Submission artist Rick Selvarajah at BAMMA 22 in Dublin. Best of luck champ!