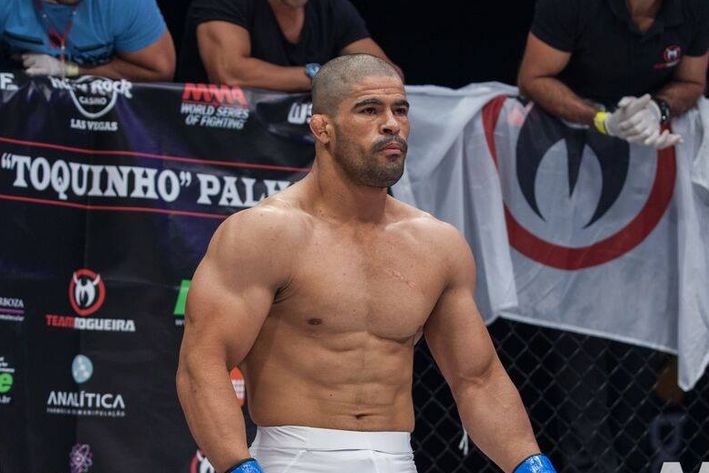 WSOF president Ray Sefo has announced The MMA Hour that Rousimar Palhares will be stripped of his WSOF welterweight title and suspended indefinitely followed his bout with Jake Shields at WSOF 22 this past weekend where he seemed to gouge his opponants eyes and held onto a winning submission too long.

“Not only did he did it once or twice,” Sefo explained regarding the eye gouges. “He did it numerous times. And he was warned by the referee on four different occasions.”

The Nevada Athletic Commission will also review the fight and could potentially punish both Palhares and Shields, the latter fighter threw a punch at Palhares after the bell in retaliation to what he believe was cheating.

Sefo said WSOF will wait on the NAC’s potential suspension for Palhares to decide how long he’ll be kept out. Palhares‘ third-round submission win also could be made a no contest. However Sefo doesn’t blame soley the fighters for what happened, but believe part of the blame also needs to go  to referee Steve Mazzagatti, who has a reputation as a poor official.

“He should have taken a point or maybe even disqualified him after he did it four times,” Sefo said.

Palhares (18-6) was cut by the UFC in 2013 amid similar controversy when he held onto a leglock submission too long against Mike Pierce, ignoring his opponents screams, taps and the referee trying to stop the fight. It has been a trademark behavior for the 35-year old Brazilian as just last year Palhares defeated Jon Fitch last December and seemed to hold onto a leg lock too long

“I think he needs to speak to somebody and they’ll be able to tell us exactly what the issue is,” Sefo said. “When you talk to the guy outside of the [cage], he seems like a very polite, very nice guy. When he’s in there, something triggers and I don’t know what that is.”

“I think the sad part of this is the guy is a great fighter,” Sefo said. “When Jake Shields is tapping nine times and the referee is tapping you six, seven times and literally pulling you off, that’s where people are gonna get hurt. We’re in a sport. We’re not in a war where we have to eliminate people.”