Turning Up The Heat

by Myles Painter
in Across The Pond
16

In order to succeed in MMA, a fighter needs to stay hungry and motivated to stay at the to 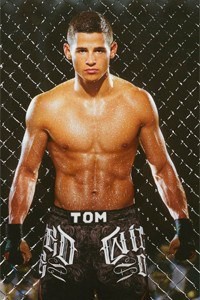 p of their game. In today’s episode of Across The Pond, you will meet a fighter who is not only doing great things for BAMMA , but is also asserting his dominance by destroying everybody in his path who tries to take away his belt. Known as ”Firekid”,  22 year old Tom Duquesnoy holds an impressive 10-1 record, consisting of five Knockouts, three Submissions, and two Decisions. ”Firekid made his pro debut in February 2012 and won via Knockout in the first round. Fighting out of Manofshadow, ”Firekid” is currently the BAMMA Featherweight champion with two title defenses under his belt. In his debut fight for the promotion in December 2013, he faced Submission artist James Saville and defeated him via Knockout in the second round. ” Firekid” next captured the Featherweight strap with a second round Triangle Choke win over fellow Frenchman Teddy Violet at BAMMA 15.He next faced English MMA veteran Ashleigh Grimshaw in the co main event of BAMMA 16. The fight was ruled a No Contest due to an accidental groin kick that rendered Grimshaw unable to continue the fight. ”Firekid” next faced Polish MMA fighter Krystof Klaczek in the main event of BAMMA 18 and defeated him via Body Kick in the third round. He will now face Knockout artist Brendan Loughnane in the main event at BAMMA 22,his third title defense.