Khabib Nurmagomedov Wants Pettis, Alvarez Or Ferguson On His Return To Action 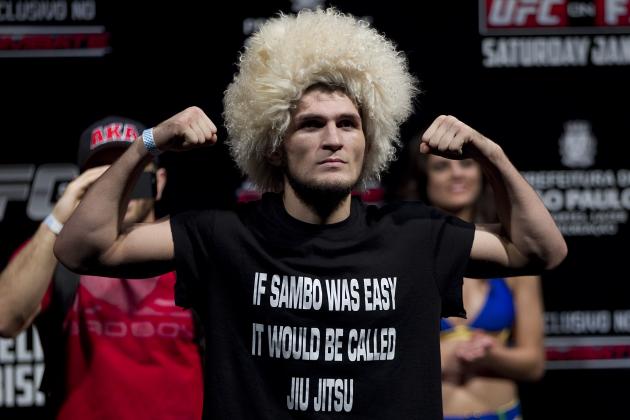 He may not have fought in over a year due to a knee injury but Khabib Nurmagomedov has remained relevant in the MMA community. Be it his his recent brawl with the Diaz brothers at WSOF 22 and his recent affiliation with an upstart Bahrain MMA team founded by one of the country’s crown princes, the UFC lightweight contender has not kept quiet.

During a recent interview with MMAJunkie.com while in Bahrain, Khabib stated he plans to return in December and revealed that he is interested in a match-up against former champion Anthony Pettis.

However Khabib is prepared to settle for former Bellator champ Eddie Alvarez or even rising contender Tony Ferguson.

“If the UFC no want to give me this guy, then I do not know. Maybe Eddie Alvarez and Tony Ferguson , like these guys. The lightweight division now has a lot of tough guys. Now I want to come back. I did not fight for one and a half years and this is very hard for me. Two surgeries in a row, it is a very hard time for me. No. 1 [goal for me is to] rehab my knee, come back, beat somebody, and next year fight for the title.”