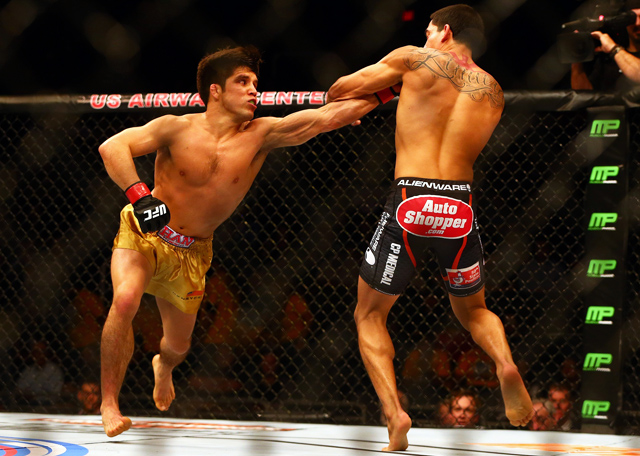 Henry Cejudo is about to take on his toughest test since arriving in the UFC as he takes on his first top five opponent. The 2008 Olympic Gold Medalist will take on no.3 ranked Brazilian Jussier Formiga at The Ultimate Fighter Latin America 2 finale in Monterrey, Mexico in November.

Cejudo (9-0) is coming off a unanimous decision victory over Chico Camus at UFC 188 to extend his undefeated run and is now 3-0 in the UFC. With his successful wrestling background, Cejudo has been tipped to one day challenge for the title, possibly being the next man to hold the belt.

Formiga (18-3) has won three fights in a row since losing to Joseph Benavidez in 2013. The 30-year olds latest win can via unanimous decision against Wilson Reis at UFC Fight Night 67.

The TUF Latin America 2 finale will take place at the Arena Monterrey on November 21 headlined by welterweights Kelvin Gastelum and Matt Brown.

Frankie Edgar Is Ready To Step In If Injuries Derail Aldo Vs. McGregor Again