by Myles Painter
in MMA News
35 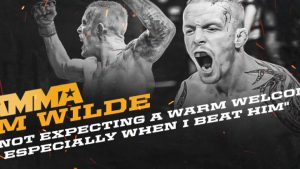 I’m Not Expecting A Warm Welcome Especially When I Beat Him
Tim Wilde is eager to get back to work in what he describes as the most “stacked division” in MMA as he prepares for BAMMA 22.

Wilde is returning to BAMMA after a two year hiatus and is ready to challenge the best lightweights the promotion has to offer.

First up for the UTC Staffs fighter is Irishman Philip Mulpeter who he will face in front of what he expects to be a partisan crowd this autumn in Dublin.

Wilde said: “I would love for them (the crowd) to recognise we are just both warriors battling it out, but I saw him fight on another show in Dublin last year and the crowd love him so I’m not expecting a warm welcome.

“Especially when I beat him.”

He added: “I think he is a good all-rounder and very tough, it looks like he has strong takedown defence and a very good top game.

“He won’t be easy to put away as he has a very good chin. I don’t think he is very good off his back and he isn’t very creative, I’d say those are his weaknesses.”

“[In preparation] I will be working with the circle I always work with,”

“They know me and know how I work. I have all the right people in it I need to make me fight ready – big shout out to my team UTC Staffs.”

Wilde is expecting to beat Mulpeter (7-5) and thinks a win will put him “in the mix” with all the lightweight title contenders.

He said: “The lightweight division is the most stacked division in the world in my opinion, there are some interesting fighters in my division.

“I just want to fight and beat them all.”

Wilde is promising to bring a more refined fighter back to BAMMA and says he has grown in experience and technique since he last fought on the show.

Staying active is also high on the agenda, especially as he has just returned from injury.

“Coming of my loss (to Sean Carter) at the end of last year, I had a terrible injury that took a lot of time to heal, but I’m 100% now and looking to stay active,” Wilde said.

“I would like to get two more fights in this year after this one.”

BAMMA 22 takes place at 3Arena, Dublin on 19 September & Tickets are on sale now at http://bit.ly/BAMMA22