by Peter Knox
in MMA News
9

In his last outing, the #1 ranked heavyweight in the UK James Mulheron (7-1) suffered his first career loss at the hands of Ruben Wolf (10-6) on Made 4 the cage 16: Invasion. The fight was all going Mulherons way until he got caught with a punch that sent him down and unfortunately broke his leg in the process, leaving him sidelined for almost a year. However in what seems like no time at all we will see him return to face the Polish man mountain in Tomasz Czerwinski (8-10). 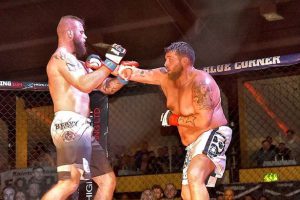 They will fight on Made 4 the cage 19, November 28th at Rainton meadows arena, County Durham. James will be coming from the first loss of his career and will be no doubt looking to get a big win to establish why he is ranked #1 in the UK. Where as Tomasz will be looking to hand Mulheron the 2nd loss of his career and catapult himself up the rankings and upset the home town favourite.

The next made 4 the cage event is on Saturday 26th September where the Northeast will see the biggest MMA show in recent decades aside from the biggest organisation in the world, UFC. The show is headlined by prospects Ryan Scope vs Jack Marshman. Also on the cards are local favourites and prospects and MMA stars including Curt Warburton, Andrew Fisher, Ryan Roddy, Kyle Redfearn, Luke Ord, Paul Gregson, Adam Proctor, Mikey Hogarth and some serious amateur talent in Jed Ramshaw, Jason Bailey and Sam Robinson.