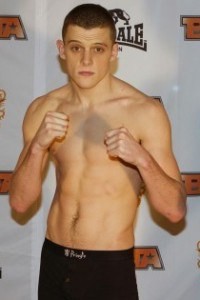 Since 2006, the Wolfslair has been home to some of the best fighters in Europe. Many UFC stars have trained there like ”Rampage” and ”The Count”. In today’s episode of Across The Pond, you will meet a fighter who is looking to put The Wolfslair back on the map. At just 22 years old, Jack McGann holds an 8-1 record in just nine career fights, with seven of those wins coming via Knockout in the first round and a lone submission as well. McGann’s fights have a history of not lasting very long, so opponents need to be extra careful when fighting him because if you come out with your hands down against Jack, your night will be over very quickly. A Professional since December 2012, McGann Defeated Malcolm Richardson, Dean Whitby,  and Mickey Elison via Knockout in round one along with several others before signing with BAMMA in December 2014.  Jack made his BAMMA debut at BAMMA 17 against Kayvan Fallah and ended the bout in under two minutes due to a Doctor’s Stoppage, keeping his unbeaten streak alive. McGann’s lone loss came under the BAMMA banner when he lost to Marc Diakiese in the co main event of BAMMA 19 for the Lightweight title via Unanimous Decision. Jack returned to his winning ways at BAMMA 21 where he defeated Frenchman Aziz Stringer via Knockout in round one. McGann will now face Jack Grant at BAMMA 22 in Dublin on September 19th, 2015 in a fight that promises to be a real barn burner.