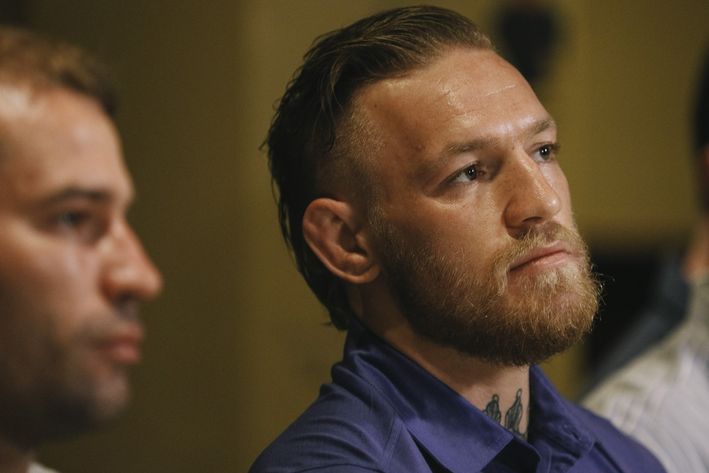 If Conor McGregor defeats Jose Aldo at UFC 194 to unify the UFC featherweight championship and his interim title, he says he is done with the competition at 145 pounds.

“I’m hoping Jose will show up,” McGregor said at a media event in downtown LA. “I’m going to retire him, end his career, and then I’ve done what I’ve said I’ll do. I said I’m going to kill the featherweight division, there’s nobody left.”

Though there is a ‘but’ in that statement and it comes in the form of Frankie Edgar. The former lightweight champion is up against Chad Mendes on December 11, a good performance and McGregor would postpone a move up to lightweight to grant Frankie a shot.

“If Frankie was to put on a phenomenal performance and stop Chad, or maybe something like that, then I can say, alright, let’s answer the Frankie question, let’s shut him down real quick,” McGregor said. “But in my mind, I’m thinking, I’m going to unify the belts, I’m going to destroy the division, and then I’m going to take the lightweight division as well. That’s where I’m headed right now.”

“I wouldn’t want to fight a lightweight guy to get the numbers because who the f—, Rafael has nothing, Donald has nothing,” McGregor said. “Rafael will be looking to make six figures this fight, and rightfully so. He shouldn’t even make six figures, because he doesn’t even bring in six figures. Donald will scrape six figures because he shows up and fights every couple of weeks. But he don’t earn much more than that. I already have the numbers, so when I go to the lightweight division, it will be to gain more gold, to warm up my other shoulder.”