The ground game is much more than Rear Naked Chokes and Armbars. In today’s episo 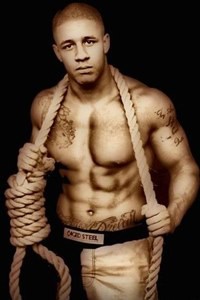 de of Across The Pond, you will meet a diverse Submission artist who will be looking to make a splash on the latest season of The Ultimate Fighter beginning September 9th, 2015. Fighting out of Team Colosseum,  25 year old Saul Rogers holds a 10-1 career with sixty percent of his victories coming by way of Submission. Rogers is very crafty on the ground so fighters need to be wary because if you get caught in Saul’s guard,  chances are you will be getting put to sleep. A Professional since May 2011, Rogers defeated his first two opponents Dan Gibbon and Danny Welsh via North South Choke and Inverted Triangle Choke respectively. Roger’s lone Professional loss to date came to BAMMA fighter Shay Walsh via Arm Triangle Choke in December 2012. After the loss, ”Hangman” signed with Cage Warriors in 2013. In his debut fight for Cage Warriors, Rogers faced Jason Coolidge at Cage Warriors 57 in Liverpool and defeated him via Rear Naked Choke in the first round. In what is arguably ”Hangman’s” biggest win to date, Rogers earned a Unanimous Decision victory over UFC veteran John Maguire in
the main event of Cage Warriors 65 in Dublin. In his next fight, Rogers defeated Mick Sinclair via Unanimous Decision at Cage Warriors 74. Rogers is currently riding a four fight win streak consisting of three Decisions and one Knockout. Good luck ”Hangman”!