Before ”Notorious” took the UFC by storm, he first made a name for himself fighting under the bright lights for Cage Warriors. In today’s episode of Across The Pond, you will meet the other half of the SBG Ireland team. A Professional since October 2008 and coached by one of the best coaches in Europe, John Kavenaugh 32 year old Chris Fields owns 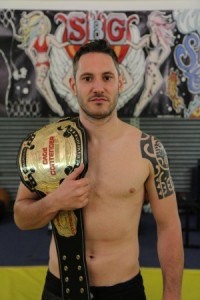 a 10-6-1 record in sixteen career fights with sixty percent of wins coming via way of Knockout . Fields possesses brutal Knockout power but is no stranger to the ground either. Chris began his career with a 17 second knockout of Anthony Rodgers in October 2008 and amassed a slew of wins including wins over BAMMA fighters Lee Chadwick and John Redmond before signing with Cage Warriors in 2011. At Cage Warriors 42, Fields faced Mario Stapele and defeated him via Knockout early in round three after Stapele injured his leg. In his next fight, Chris faced Jack Mason at Cage Warriors 45 in Dublin and defeated him via Head Kick and Punches in under a minute. In what many consider Fields best war under the Cage Warriors banner, Chris faced Welshman John Philips at Cage Warriors 48 that ultimately saw him go on to lose via Submission in the second round. He then briefly became the Cage Warriors Middleweight Champion by stopping Submission artist Pavel Kusch in the third round at Cage Warriors Fight Night 7. After losing to Jessie Taylor at Cage Warriors 51 and fighting to a draw with Frenchman Norman Paraisy at Cage Warriors 55 respectively, Fields was selected to be a cast member of season 19 of The Ultimate Fighter at 205 pounds. After doing TUF, Chris returned to Middleweight when he signed with BAMMA this year. At BAMMA 18, he faced Cheik Kone and lost via Knockout in just 23 seconds. Fields will now face Christopher Jacquelin in the co main event of BAMMA 22.