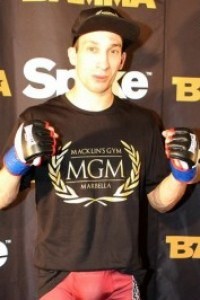 When it comes to fighters in the Flyweight division, one punch can end an opponent’a night very quickly.In today’s episode of Across The Pond, you will meet a fighter who is just one of the many up and coming Flyweights in Europe. Fighting out of Pariah MMA, 23 year old Chris Miah holds a 7-0 record consisting of four Submissions, two Knockouts, and one decision. Miah has Knockout power but is more comfortable on the ground. Miah made his Professional debut in July 2011 by choking out Brett Healy in the second round via Rear Naked Choke. He defeated George Burton via Triangle Choke in the first round followed by a Unanimous Decision victory over Jamie Nolan. Miah then Submitted Mark Handley and knocked out Josh Foster before signing with BAMMA in February of this year. In his debut fight for the promotion, Miah faced Mick Gerrard at BAMMA 18 and defeated him via Knockout late in the second round. At BAMMA 20, he faced late Replacement Daniel Barez and defeated him via Rear Naked Choke in the second round. The Flyweight strap will be just one of the five titles at stake at BAMMA 23 on November 14th, 2015 when Miah takes on Germany’s Rany Saadeh.