SEOHEE HAM AND CORTNEY CASEY SET FOR SEOUL THIS NOVEMBER

by Michelle Luce
in UFC
7 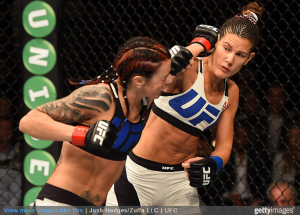 The UFC has announced a fight in the women’s strawweight division between Seohee Ham (15-6) and  Cortney Casey (4-2). The fight will take place on November 28th as a part of UFC Fight Night 79 Henderson vs Alves from Seoul, South Korea. Both fighters fell short in their impressive debuts against strawweight standout Joanne Calderwood and now have their eyes set on their first victory in the octagon. The main event for UFC Fight Night 79 is match up in the welterweight division between Benson “Smooth” Henderson and Thiago “Pitbull” Alves”. The event will take place at the Olympic Gymnastics Arena in Seoul, South Korea.

Ham the former kickboxer was on a six fight win streak before her loss to Calderwood. She was scheduled to face Bec Rawlings back in May but withdrew with an Injury. She has faced some formidable talent in the division including current Invicta FC atomweight champion Ayaka Hamasaki. Cortney was on a three fight win streak before her match with Calderwood that ended up being “fight of the night” for UFC Fight Night 71. The fight will take place on the preliminary rounds of UFC Fight Night 79.

Mirko Cro Cop makes his return as well with heavyweight fight against Anthony “Freight Train” Hamilton. While Dong Hyun Kim and Jorge Masvidal will mix it up in a welterweight feature bout on the main card.