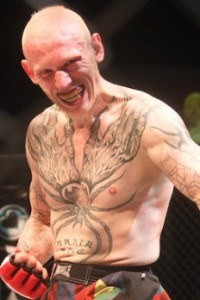 z. In today’s episode of Across The Pond, you will meet a fighter who is not afraid to be himself while putting on a show for the fans at the same time. 32 year old Colin Fletcher holds a 11-5 record in 16 career fights consisting of seven Submissions, three Decisions, and one Knockout. A professional since May 2008 and fighting out of The Fight Pit, Unity Gym, and Spartan Gym, Collin defeated his first four opponents via Submission including wins over Cage Warriors veterans Matt Inman and Ronan Mckay. Colin first became known to fans when he signed with BAMMA in 2011, defeating David Round via submission in the first round in his debut fight for the promotion at BAMMA 8. He defeated Jason Ball at BAMMA 9 before signing with the UFC to be a contestant on TUF Smashes. Colin  made it all the way to the finale of the show but would ultimately lose the contract to Norman Parke at UFC on FX 6 via Unanimous Decision. After losing a Unanimous Decision to Mike Ricci at UFC 158, Colin was released from the promotion, he then resigned with BAMMA in December 2014. Collin faced Tim Newman at BAMMA 13 and earned a Unanimous Decision win. After losing a thrilling fight to ”Tarzan” at BAMMA 14, Colin  scored back to back wins over Tony Hervey at BAMMA 15 and a knockout win at BAMMA 17 before losing to Andre Winner at BAMMA 20. Colin’s next fight will be a 170 pound bout against Vincent Del Guerra On November 28th,2015.